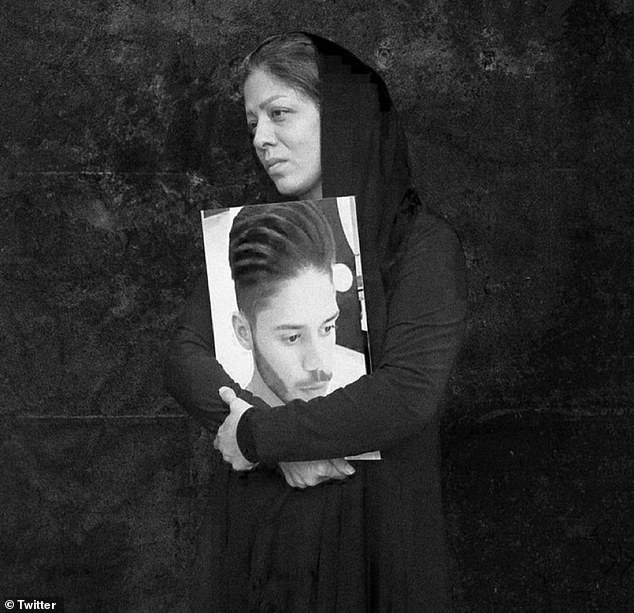 By Rachael Bunyan For Mailonline

A grieving Iranian mother now faces 100 lashes after she was convicted for protesting against the death of her son who was shot in the heart by security forces during a demonstration over the rising price of fuel in 2019.

Mahboubeh Ramezani, the mother of 18-year-old Pejman Gholipour who was killed during deadly protests, was arrested on July 11 and is currently being held in the infamous Evin prison in Tehran.

Her surviving son, Peyman Gholipour, said the Iranian authorities have ‘constantly intimidated’ Ramezani because she has never stopped calling for justice and accountability for Pejman’s death.

Ramezani was sentenced to 100 lashes by the Iranian regime a few months ago in absentia – but she will now serve that sentence following her arrest.

Mahboubeh Ramezani, the mother of 18-year-old Pejman Gholipour who was killed during deadly protests, was arrested on July 11 and is currently being held in the infamous Evin prison in Tehran. Pictured: Ramezani holding a picture of her dead son Pejman 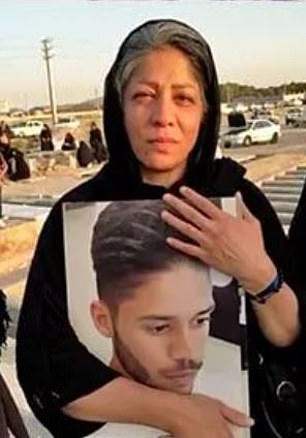 Her son Peyman wrote on Instagram: ‘My mother was under pressure for a long time. They constantly intimidated her, and she had been summoned several times.

‘They condemned her to 100 lashes a few months ago, but that did not scare my mother.

‘What do we have to lose after Pejman? What is left after November 2019? They were looking for an excuse to silence my mother.’

He added: ‘My mother’s only crime is that she seeks justice. This is the most important reason they fear her. They fear her because she has not even put down Pejman’s picture for a moment.’

At least 304 people were killed during the week-long protests over the sharply spiking price of gasoline in Iran in November 2019, according to Amnesty International.

Ramezani’s son Pejman was one of the protesters who died during the protests after he was shot in the heart by security forces in Andisheh, Tehran province, on 18 November 2019.

Ramezani was arrested by security forces on 18 November 2021 and temporarily detained after she held a commemoration event to mark the second anniversary of Pejman’s death.

On the day of the memorial, security forces descended on the village of Malat, where Pejman is buried, closed the roads in and out of the area and arrested a number of relatives and mourners and confiscated their phones.

The Iranian regime has acknowledged that its security forces shot and killed protesters during the demonstrations in 2019. 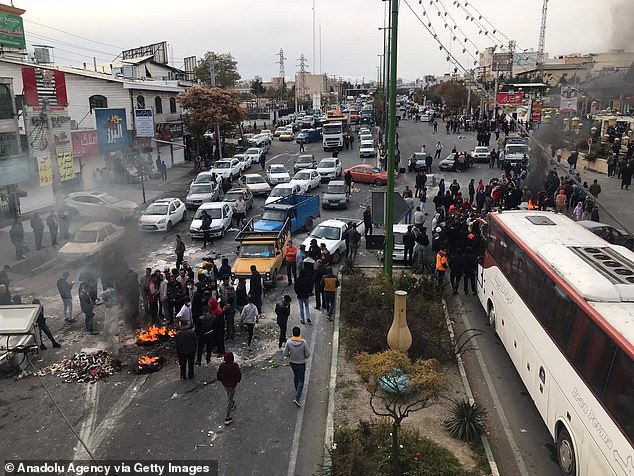 At least 304 people were killed during the week-long protests over the sharply spiking price of gasoline in Iran in November 2019, according to Amnesty International. Pictured: Protesters demonstrate against a gasoline price hike in Tehran, Iran, on November 16, 2019

A December 2019 report by Iranian state television sought to portray those killed as ‘rioters’ or foreign-backed insurgents who threatened military posts, oil tanks and the public. It acknowledged that the violence also killed passers-by, security forces and peaceful protesters without assigning blame.

Iran has been accused of failing to hold the perpetrators to account for the violent crackdown against the widespread protests.

‘Iranian authorities have avoided any measure of accountability and continue to harass the families of those killed during the protest,’ said Tata Sepehri Far, Iran Researcher at Human Rights Watch in 2020.

‘Families of hundreds of victims, most of them from the more vulnerable segments of Iranian society, deserve to see those responsible for the serious rights violations held accountable.’

The death toll of at least 304 has made the 2019 protests the bloodiest unrest in Iran since the time of the Islamic Revolution. The 2009 Green Movement protests that followed a disputed presidential election drew millions to the streets but saw far less killing.

The demonstrations began on November 15 after the government raised minimum gasoline prices by 50 per cent.