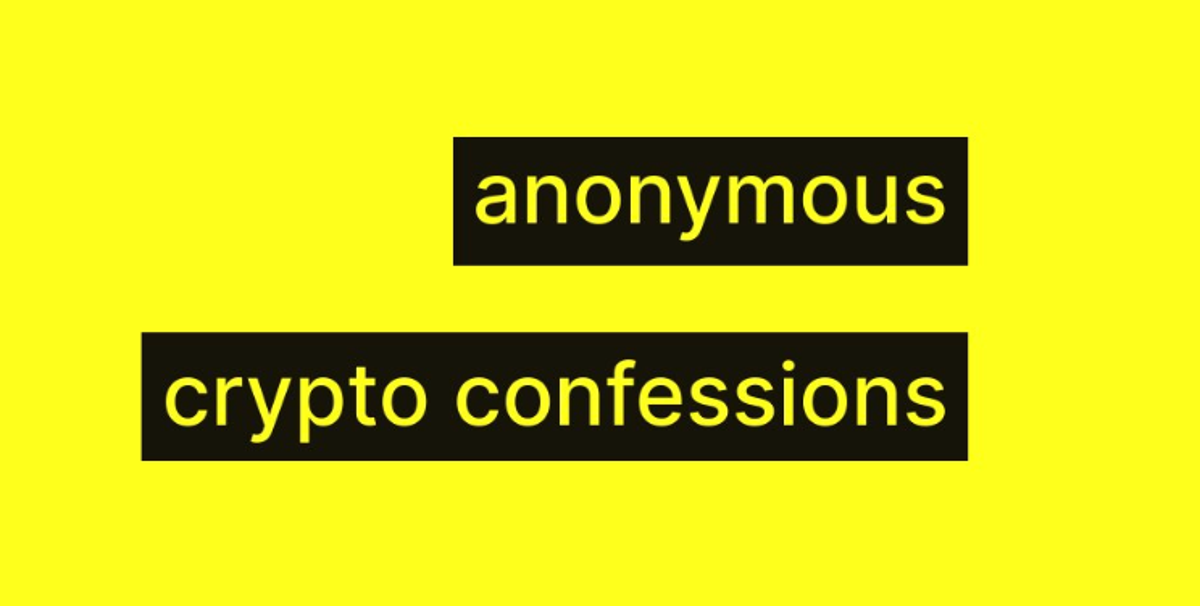 From the father who gambled away his daughter’s college fund and now can’t look her in the eye to the son who blew half a million dollars from his mother’s pension fund, a new crypto confession box is offering a glimpse into life as an investor during 2022’s crypto winter of discontent.

The Coinfessions Twitter account is where investors divulge their darkest secrets of loss, heartbreak, and occasional success, to 80,000 strangers online. The sometimes hilarious, often absurd and at times tragic tales are posted anonymously. Often, the tales of woe are shared by people who haven’t even told their story to those closest to them.

Charlie, the creator and curator of Coinfessions, tells The Independent in his first interview that the anonymised submission process means he has no way of verifying if the confessions are true.

And besides, he says, that’s not really the point.

“Loads of people will message me saying, ‘oh this is bulls**t’. I’ll be like, ‘well it might be. I don’t know if it is,’ and ultimately I don’t think it matters. If you take something from it, great. If you don’t, you don’t.”

I told my partner I sold all my crypto to buy her engagement ring. The last time she asked, my portfolio was worth £50,000. Her ring is a £1,500 fake diamond. It was all I had left and I have no money for a wedding.

The Twitter account has steadily gained thousands of followers since launching in April, and become something of a soothing balm for many of those burnt by their own impulsive decisions. Many commenters say they feel better to see that there’s someone even more reckless out there than they are.

Like those who submit their candid revelations, Charlie maintains a largely anonymous online profile. He’s only prepared to share his first name, and that he’s a digital designer from the United Kingdom in his mid-30s.

Coinfessions receives anywhere from 40 to 100 entries each day, says Charlie. They’re sent via Google document, and no contact information or ID is required. He then screens them for plausibility, relatability, specificity and quirkiness, and only posts around one in ten.

Charlie says he filters out posts that could be harmful, derogatory or libellous. Appeals for money and non-crypto posts are also vetoed.

“I’ve been blown away by the response I’ve had, and also the lengths that some people will go to to try and make it in crypto,” he says.

“I try and find some positive stories but by and large they are negative, and I think that’s indicative of the market conditions we are seeing not just in crypto but all round. There’s a lot of desperation out there, and it’s actually really sad.”

Charlie’s ideal posts are those that offer insight into human behaviour and psychology.

One from 8 July claimed to be from a father who invested $80,000 of his daughter’s college fund in the Solana cryptocurrency at a price of $220. The coin now trades at around $40.

“Hurts me every time I look at her. I thought I could make it 300k and move our family from Chicago. She still thinks I have the money and that I can send her to the same college as her friends.”

Took 80k out of my daughter’s college fund to long Solana at 220. Hurts me every time I look at her. I thought I could make it 300k and move our family from Chicago. She still thinks I have the money and that I can send her to the same college as her friends.

While many refer to monetary losses and gains, they can also be poignant. One of the first Coinfessions posts remains one of Charlie’s favourites.

“I sold all my crypto during the 2021 May crash, not because of panic, but to pay for my son’s chemotherapy. Best decision I’ve ever made, even though he’s gone now.”

I sold all my crypto during the 2021 May crash, not because of panic, but to pay for my son’s chemotherapy. Best decision I’ve ever made, even though he’s gone now.

Another tweet that went viral spoke to the gallows humour of many in the crypto industry.

“The guy that used to bully me in school, and I secretly hate, asked me for trading advice,” the 27 June tweet said.

“I wanted him to lose money, so told him to do the exact opposite of me and short support last week. He made 9k profit and I got liquidated.”

Short support, or short selling, refers to the practice of betting that an investment will decrease in value.

The guy that used to bully me in school, and I secretly hate, asked me for trading advice. I wanted him to lose money, so told him to do the exact opposite of me and short support last week.

He made 9k profit and I got liquidated.

Matt Damon and Lebron James were among the celebrities and sports stars who fronted splashy marketing blitzes for the Crypto.com exchange. Kim Kardashian promoted EthereumMax coin to her hundreds of millions of social media followers.

Polls conducted around this time suggested that basic cryptocurrency concepts were widely misunderstood.

One survey found 98 per cent of respondents who were aware of the crypto industry had failed The Crypto Literacy Survey. Failure meant that respondents answered fewer than 10 of 17 questions correctly.

But that lack of knowledge didn’t stop many from leaping in. At around the same time, a Pew Research poll found 16 per cent of American adults had invested in or used some type of cryptocurrency. Nearly half of US men aged 18 to 29 reported dabbling in crypto.

The beginning of 2022 saw crypto values start to tank.

Inflation, the economic downturn and war in Europe began to spread fear throughout the financial markets, and a contagion effect hit the crypto industry.

Even still, exchanges like Crypto.com and Coinbase shelled out as much as $7m for 30 second adverts at the Super Bowl in February. By May, the price of Bitcoin had more than halved to under $30,000.

The value of NFTs, the digital assets that represent real-world objects like art, music and videos, also plummeted.

Investors who lost hundreds of millions of dollars when the EthereumMax coin plunged in value announced they were suing Kardashian, boxer Floyd Mayweather and former NBA star Paul Pierce for an alleged “pump and dump” scheme.

The June collapse of TerraUSD, a so-called stable coin whose value was supposed to be pegged to the US dollar, and its sister coin Luna, spread further panic.

A Coinfession post on 6 June told of losing “mid-six figures revenge trading my LUNA losses”. Revenge trading is when an investor enters a new trade after a significant loss to try to recover their money.

“My girlfriend and I were going to buy a house and her Dad gave her 200k to match my 200k. I no longer have anything and haven’t told her yet.”

Won life-changing money twice. Both times I took the path down to zero. Greed is a bitch and I never learn…

And then there are the posters who claim to be sitting on fortunes in the millions or even tens of millions of dollars. For some in this subgenre, making enormous wealth has not brought about happiness or fulfilment, he says.

“A lot of them have made lots of money and are seemingly at their wits end about what to do with their life. They’ll say, ‘It feels like I won the lottery and now I’m depressed’. Like the dog who caught the van, they don’t really know what to do.”

This is sometimes referred to as “sudden wealth syndrome”, loosely described as suffering an identity crisis after becoming wealthy.

It bears repeating that these stories are completely unverifiable, but Charlie says having seen so many of them, he’s developed a keen antenna for fakes.

“Let’s be honest, most people are in crypto for the speculation,” Charlie tells The Independent. “There are definitely charlatans out there, there are people trying to sell you snake oil.”

During the heady days of ‘20 to ‘21, thousands of so-called s**tcoins emerged. These coins, often with nonsensical names and no discernible value, attracted investors who had missed out on the rise of Bitcoin and Ethererum.

Many inflated rapidly in value before crashing, leading to heavy losses for investors. Dogecoin, which was started as a “joke coin” in 2013 and later became a favourite of Elon Musk, is sometimes referred to as a s**tcoin.

Mr Musk’s enthusiastic tweets about Dogecoin saw its value surge to $50bn in 2021. Its price has since fallen by more than 65 per cent.

In June, a Dogecoin investor said he was suing Mr Musk for $258bn, accusing him of running a pyramid scheme to support the cryptocurrency, Reuters reported.

Mr Musk recently said he still owned Dogecoin, and revealed Tesla had also invested in the cryptocurrency, in an earnings call in July. The world’s richest man also said Tesla had sold 75 per cent of its Bitcoin holdings for just under $1bn.

Charlie says the crypto industry is only one part of a broader societal shift towards riskier financial practices such as online sports betting and day trading of so-called meme stocks, such as those promoted by the Reddit group WallStreetBets.

He says 40-year high inflation levels across the United States and Europe are pushing many into making more perilous investments as they watch their purchasing power disappear.

“Money is literally melting in your bank account,” Charlie says. “People are forced to take ever more drastic measures to protect what they have.”

‘I flipped lots of s**tcoins, built my stack’

Charlie says he bought his first Bitcoin in 2013 and then promptly forgot about it for a few years. Then, as cryptocurrencies began to take off in 2017, and the price of Bitcoin skyrocketed from $1,000 to $19,000, he became a part-time trader.

“I realised that was terrible, and started looking more seriously into trading and charts and started thinking about what got me into it in the first place.”

He started designing NFTs with phrases like “it’s not about money, it’s about freedom” and “more focus, more edge”.  The digital illustrations were an attempt to turn sound advice into visual cues, and are compiled on his website Alpha Illustrated.

Charlie also began interviewing successful crypto traders and sharing their tips via a monthly newsletter, with an emphasis on a measured, long-term approach to investing.

He wanted to create Coinfessions as an alter-ego to Alpha Illustrated to show the reality of how many traders operate: motivated by yolo (you only live once), fomo (fear of missing out) and greed, while dramatically overestimating their chances of success and not considering their appetite for loss.

“This is what people are actually doing,” he explains. “They’re not doing their due diligence, they’re not putting money aside for tax. I wanted to show the other side of the coin.”