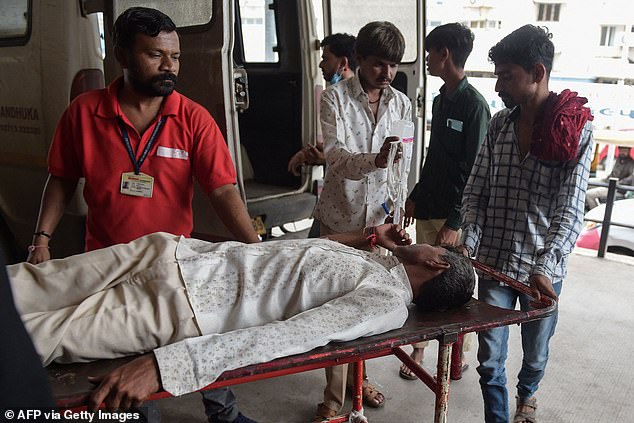 By Ap and Tom Brown For Mailonline

At least 28 people have died and 60 others have become ill from drinking alcohol spiked with methanol to increase its potency in western India.

The deaths occurred in the Ahmedabad and Botad districts of Gujarat state, where the manufacture, sale and consumption of alcohol is prohibited.

‘There was 98 percent methanol in the liquor they consumed, that means they had consumed methanol only which has increased the death toll,’ Bhavnagar Ashok Yadav, inspector general of police, told The Times of India.

The Ahmedabad city crime department has arrested a chemical owner Jayesh Khavadiya from Narol and his eight accomplices over suspected bootlegging.

The death toll is expected to increase further after several patients arrived in Ahmedabad civil hospital for treatment.

A man is shifted on a stretcher upon arriving in an ambulance at the Civil Hospital in Ahmedabad on July 26, 2022, after suffering health problems due to consuming bootleg liquor

The Gujarat province has banned alcohol consumption since 1960 as a homage to Mahatma Gandhi, killed in 1948, but hundreds of residents have died across the decades as the illegal liquor trade sprung up.

Illicit liquor has also become a hugely profitable industry across India where bootleggers pay no taxes and sell enormous quantities of their product to the poor at a cheap rate.

Local police regularly turn a blind eye to the liquor trade as bootleggers pay bribes to carry out their illicit selling in the villages, local Indian media reported.

Dhandhuka MLA Rajesh Gohil had also written to the authorities seeking action against bootleggers in the area.

‘There is rampant bootlegging of liquor thanks to the nexus of bootleggers and the police and patronage provided by the BJP leaders in the state,’ said senior Congress legislator Amit Chavda, according to The Hindu, adding: ‘Police regularly take monthly bribes from the bootleggers.’

In 2020, another 120 people died after drinking spiked alcohol in India’s northern Punjab state. 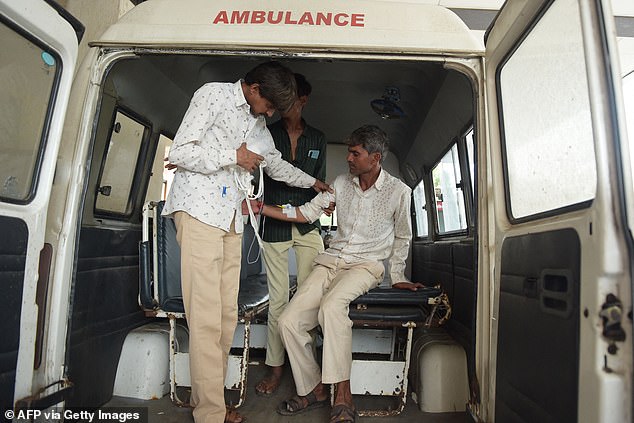 A man (R) arrives in an ambulance at the Civil Hospital in Ahmedabad on July 26, 2022, after suffering health problems due to consuming bootleg liquor