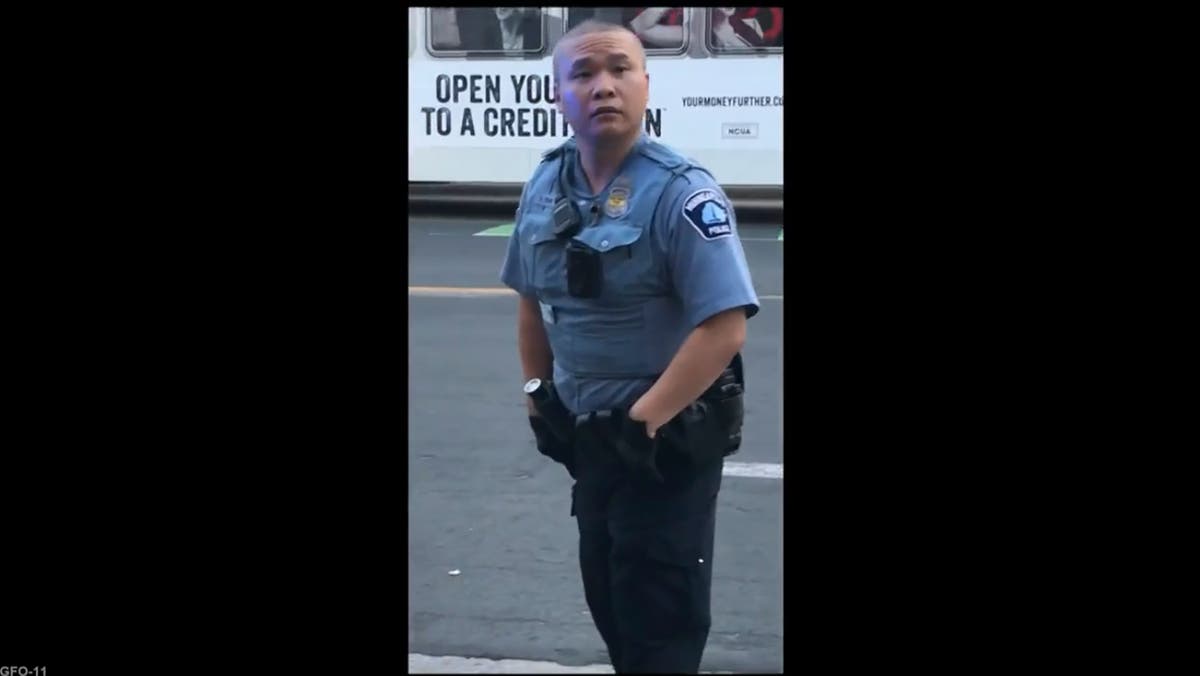 Disgraced former Minneapolis police officer Tou Thao gave a 22-minute speech during his sentencing, during which he preached Bible quotes to the court but offered no apology to George Floyd’s family for his role in the Black man’s death.

Thao was sentenced to three-and-a-half years in federal prison on Wednesday for violating Floyd’s civil rights when he stood by and failed to intervene during his Memorial Day 2020 murder.

The eight-year veteran of the Minneapolis Police Department was sentenced alongside his fellow officer J Alexander Kueng, who was handed a slightly shorter sentence due to his lack of experience as a rookie officer.

While Kueng declined to deliver a statement at his sentencing, Thao took the opportunity to give a long-winded speech to those gathered in the courtroom, including Floyd’s grieving girlfriend and cousin.

In a 22-minute rambling speech, he reeled off quotes from the Bible and claimed he had been “born again” after turning to religion following his arrest.

“When I walked into that jail cell, I grabbed a Bible, and I searched for it, I searched for an answer to all this wickedness, and I couldn’t find it,” he said.

But – despite his apparent new-found faith – Thao failed to apologise once to Floyd’s loved ones or show remorse for his actions that day.

The only person he apologised to was the court reporter who had to transcribe his rambling speech.

Instead, he complained about the “false accusations” made against him and appeared to preach at Floyd’s family and the prosecutors that they should also “turn to God”.

“Don’t forget about God. Turn to him,” he said.

“As a father of three kids, I can sit here and appeal for mercy. But I appeal to my friends to turn to God.”

Moments earlier, Floyd’s girlfriend Courteney Ross had delivered an emotional victim impact statement where she condemned his remarks during her boyfriend’s murder and telling him to think of Floyd when he is “scared” in his prison cell.

“As you watched my love being suffocated under the knee of your co-officer, I will never forget you saying to the crowd of onlookers, ‘This is why you don’t do drugs,’” she told him. “No one deserves to be treated as less.”

She added: “I had seen my big strong, muscular man be shaken and sad when he was in a small space. He wasn’t trying to resist that day, he was just so scared. When you get scared in that small prison cell, remember how Floyd felt.”

Thao kept a crowd of bystanders back and stopped them intervening as Floyd was dying under Chauvin’s knee. Meanwhile Kueng pinned down Mr Floyd’s back and Lane held down his legs.

Thao pleaded not guilty at his trial back in February and sought to push the entire blame for Floyd’s death onto the senior-most officer on the scene Chauvin.

When he took the witness stand, he had a testy exchange with prosecutors when they questioned why he didn’t try to stop Chauvin from murdering Floyd.

“I think I would trust a 19-year veteran to figure it out,” he said.

Thao was found guilty of both charges of failing to provide Floyd with medical aid and failing to stop their colleague Derek Chauvin from murdering him as he pinned the Black man to the ground by the neck until he died.

Kueng was also conviced on the two counts while their fellow officer Thomas Lane – who asked twice if they should roll Floyd into a different position – was convicted on one count of failing to provide medical aid.

All three, who stood trial together, have been told to surrender to US Marshals on 4 October.

Chauvin received a sentence of 21 years earlier this month, to be served concurrently alongside his 22.5 year sentence on state charges of murder and manslaughter.

He avoided going to federal trial with his three fellow officers by reaching a plea deal in December to plead guilty to the federal civil rights charges in exchange for spending the remainder of his sentence in a safer, comfier federal facility.

At his federal sentencing, Chauvin addressed the children of the man he killed.

He told Floyd’s children that he wishes them “all the best in their life” but stopped short of apologising for leaving them to grow up without their father.

“I just want to say that I wish them all the best in their life and have excellent guidance in becoming great adults,” he said.

The state trial has been delayed multiple times and is now scheduled to begin in January 2023.

Lane reached a plea deal with prosecutors back in May so is no longer heading to state trial with the two other officers.