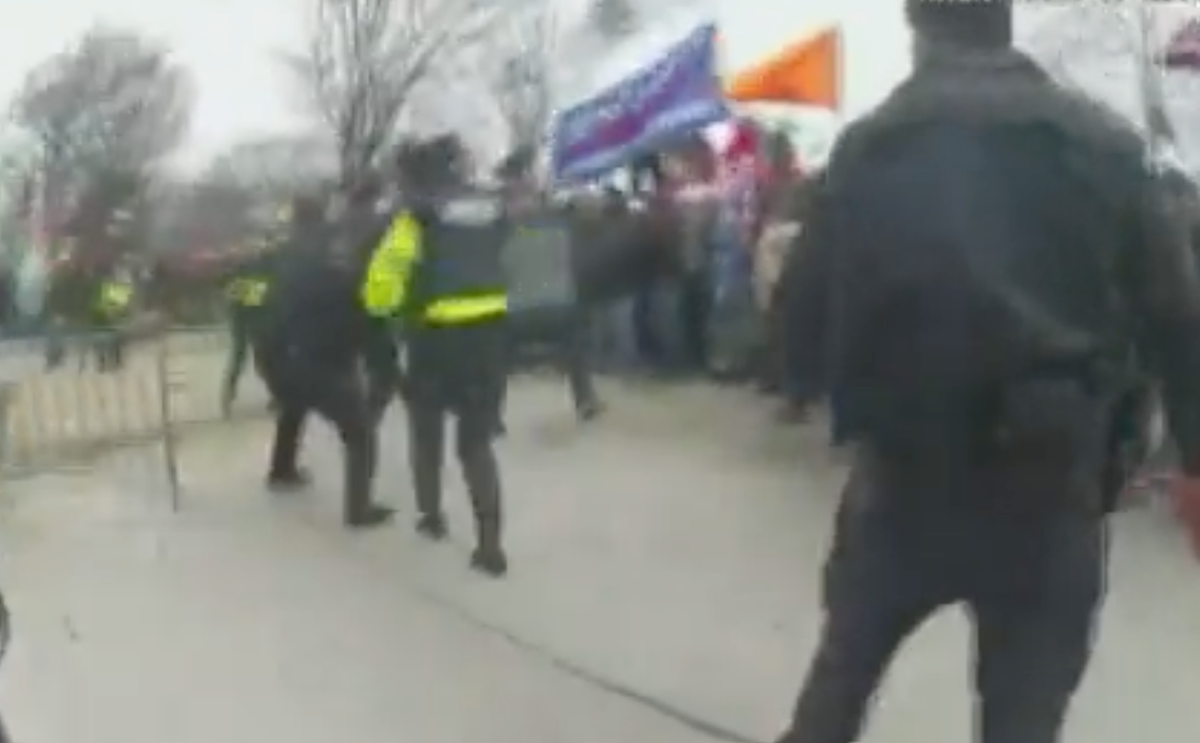 A co-defendant has pleaded guilty to reduced charges in the Capitol riot assault of three police officers, including Brian Sicknick, who died of natural causes after the insurrection.

That was a reduction from what the 40-year-old initially faced – 10 counts including felony charges such as assaulting officers, obstructing Congress’s certification of the 2020 election results, and rioting, according to The Washington Post.

Sentencing guidelines recommend a sentence of up to a year, but the West Virginian has already spent five months in jail.

Tanios’ sentencing hearing is set to take place on 6 December. The sandwich shop owner’s co-defendant is Julian Elie Khater. They were both accused of assaulting Mr Sicknick, who was injured during the riot and died of natural causes the following day, according to officials.

Niether of the co-defendants is accused of having caused Mr Sicknick’s death.

In his plea, Tanios said he brought two cans of chemical spray to the nation’s capital, and that he gave one of the cans to Khater before they arrived at the Congressional complex.

Khater is set to go to trial on 5 October. Lawyers noted in court that they were discussing if he would be pleading guilty to two felony charges of assaulting officers with a dangerous weapon, according toThe Post.

While Tanios operated a Sandwhich shop, Khater ran a smoothie shop, both located in college towns.

Arrested in March of last year, just months after the riot, they pleaded not guilty to the assaults of Mr Sicknick, another Capitol Police officer, and a DC officer.

“Give me that bear sh**,” Khater reportedly told Tanios in a video clip filmed nine minutes before in the area where Sicknick and other officers were guarding Congress.

“Hold on, hold on, not yet, not yet … it’s still early”, Tanios is alleged to have said in return.

Elizabeth Gross, the lawyer representing Tanios, argued that he was 30 feet (9 metres) away when Khater used the spray and didn’t have a role in the crime.

Officials have said that Mr Sicknick experienced two strokes after protecting the Capitol. The medical examiner said no evidence was found to support that he had suffered an allergic reaction to the irritants and that the autopsy found no injuries.

While Khater has remained in jail, Tanios was released in August last year after an appeals court noted that he had “no past felony convictions, no ties to any extremist organizations, and no post-January 6 criminal behavior that would otherwise show him to pose a danger to the community”.

“These two gentlemen are law-abiding, respected individuals in the community, and it makes it very difficult for the court to make this conclusion, but they still committed this attack on uniformed police officers. I don’t find a way around that,” he said at that time.