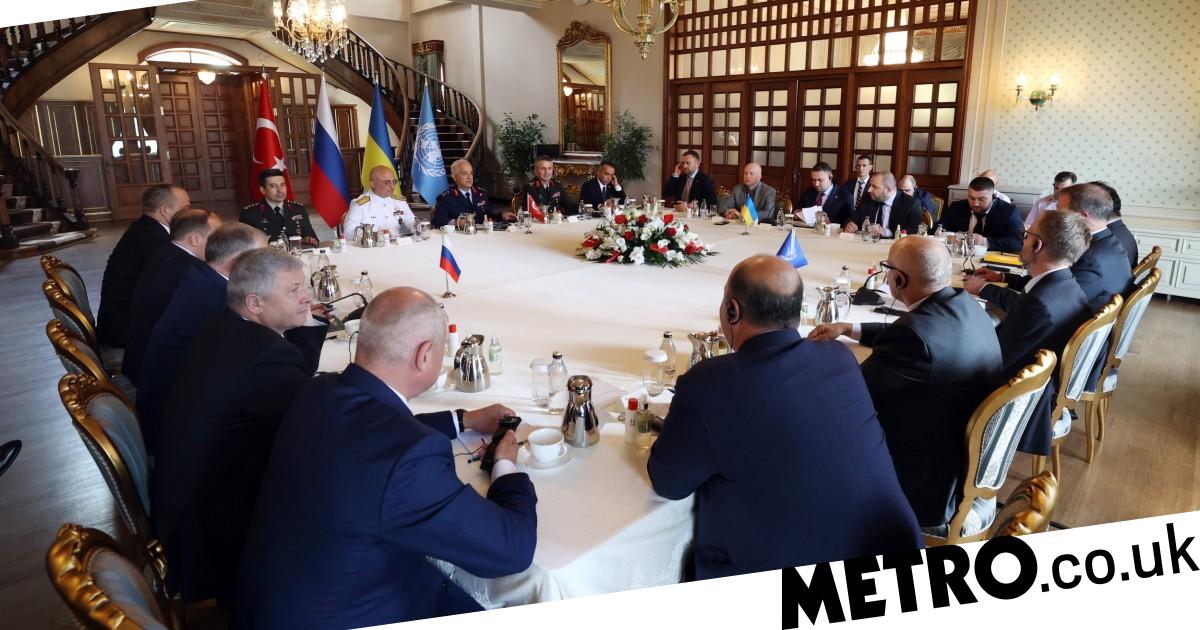 Negotiations to end a blockade of Ukrainian ports endangering food supplies in developing countries are a step closer to resolution.

Ever since Vladimir Putin launched his invasion, Russian vessels have been blocking cargo ships off Ukraine’s Black Sea coast.

It has sent prices of grains and sunflower oil soaring, hitting pockets of Western consumers and putting developing nations, particularly in Africa, at risk of famine.

The UN says the blockade is putting 181million people at risk of hunger, as well as driving global good prices higher.

Ukraine is one of the world’s biggest exporters of wheat, corn and sunflower oil and 22 million tons of grain are stuck in silos in the war-torn country, claims president Volodymyr Zelensky.

Russia and Ukraine are both often referred to as the world’s breadbasket and jointly account for nearly a third of wheat supplies.

Military chiefs from both sides met in Istanbul today to discuss a way to end the Black Sea blockade.

Russia, Ukraine, Turkey and the United Nations are now due to sign a deal next week aimed at resuming Ukraine’s grain exports.

If a deal is agreed it will establish a centre in Istanbul to control shipments, Turkey said.

A preliminary date for the next four-way meeting is July 20 or 21, the Russian RIA news agency reported, citing a source familiar with the situation.

But the Turkish defence ministry said the date of the next meeting is still not clear.

Any deal would require the removal of mines near Black Sea ports and political will despite Moscow and Kyiv being far from any kind of peace settlement.

‘The information about a technical decision to create a coordination centre for the export of Ukrainian grain in Istanbul logically means that there is no political decision yet. And that is not surprising,’ said Bohdan Yaremenko, a lawmaker for Zelensky’s party.

He added: ‘If there is a need to announce results of the negotiations, the military will do so.’

Mr Putin has pledged Moscow will not use the Black Sea corridor to launch an attack, if the sea mines at Ukrainian ports are cleared.

And his foreign minister, Pyotr Ilyichev, claimed Ukraine is fuelling the blockade by barring 70 ships from 16 countries from leaving its ports.

‘Our conditions are clear. We need to have a possibility to check ships to prevent any attempts to smuggle weapons in,’ he added.

But Kyiv is sceptical an agreement can be struck, saying Mr Putin went back on a vow, made at the beginning of the year, not to invade Ukraine.

UN secretary-general Antonio Guterres admitted ‘there is a way to go’ to secure a deal.