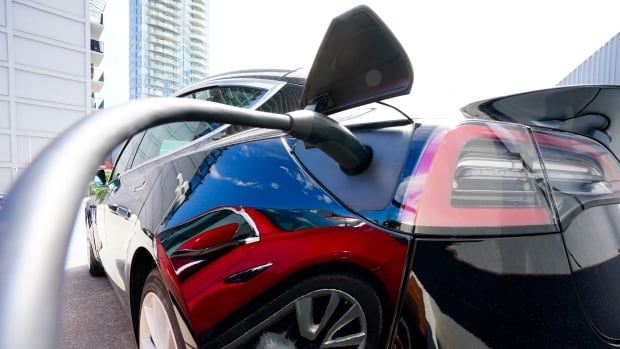 The existential crisis confronting Canada’s automotive industry may finally be over.

Instead, the Senate majority leader and the West Virginia moderate are proposing an amendment to U.S. President Joe Biden’s climate and health bill that would expand the credits to include all of North America.

The amendment includes an expansion of the $7,500 US consumer credit that was previously limited to U.S.-made “clean vehicles,” which include  battery-electric, plug-in hybrid and hydrogen fuel cell.

There is also a new $4,500 credit for used EVs and a new $10 billion investment tax credit to build clean-technology manufacturing facilities, according to a summary from Schumer’s office.

To be eligible for the credits, the amendment would also require that vehicle batteries contain a certain percentage of material sourced from U.S. free trade partners and that the retail price be capped at $55,000 for new cars and $80,000 for pickup trucks, SUVs and vans.

“This is good news for Canadian workers, jobs and our manufacturing industry,” she said in a statement.

“As the bill moves through Congress, we will continue to advocate for the importance of maintaining these integrated supply chains and growing a greener and more prosperous future for North America.”

The move was expected to please automakers such as General Motors, Tesla and Toyota, that have been expanding their electric vehicle manufacturing and were critical of the Buy American bill when it was first proposed last year.

Under the amendment, the credit will no longer be limited to manufacturers with sales of 200,000 EVs or fewer.

The legislation is still a long way from passing. Schumer said the U.S. Senate was expected to vote on the proposed legislation next week, and it would next go to the Democratic-controlled House of Representatives.

It’s sure to infuriate Senate Republicans, who will be reluctant to give Democrats a legislative win with midterm elections looming in November.

Manchin is a pivotal vote in the evenly divided Senate, but the bill will still need 60 votes to avoid Republican filibuster tactics.

made vehicles.<br><br>New Democrat Senate package with <a href=”https://twitter.com/Sen_JoeManchin?ref_src=twsrc%5Etfw”>@Sen_JoeManchin</a> support NOW says credit applies to vehicles “manufactured in North America”.<br><br>A lot of us spent A LOT of time on this.

If it becomes law, it will further provide up to $20 billion in loans to build new clean vehicle manufacturing facilities and $30 billion for additional production tax credits “to accelerate U.S. manufacturing of solar panels, wind turbines, batteries, and critical minerals processing.”