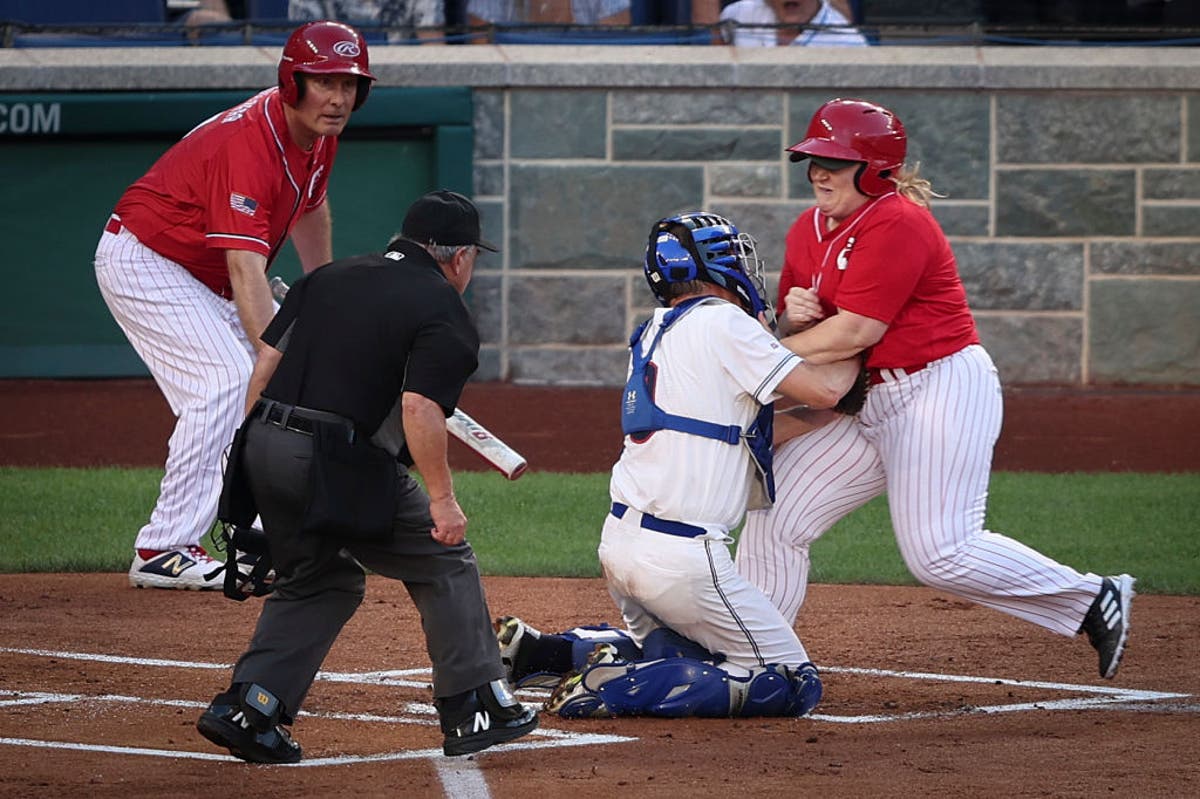 Climate activists rallied outside of the annual charity baseball match between Democrats and Republicans on Thursday after the former staved off potentially greater direct action with a last-minute deal to make historic investments in fighting climate change.

Demonstraters with Now or Never initially planned to disrupt Thursday’s game, which ended a little after 8:00 p.m. as a result of a sudden DC summer storm that began downpouring on the crowd as the sun was going down. But a massive Capitol Police and MPDC presence coupled with the Democrats’ announcement of a deal between Joe Manchin and Senate Majority Leader Chuck Schumer on Wednesday appeared to have muted those plans slightly though roughly a hundred people still rallied outside of Nationals Park.

There were no real disruptions to the game itself, though activists chanted “seal the deal” about a block away and encouraged Democrats to keep pushing and see the framework announced by their leaders a day earlier become law. A handful of activists who were in the stands instead of with the main group also had their banners confiscated by Capitol Police.

Four people were arrested during Thursday’s protest, according to a spokesperson for the group who promised further direct action in the days ahead to keep pressure on Democrats in Washington.

Some of that action would occur later this week, the group specified to The Independent.

“Indigenous communities and tribal lands have long been sacrifice zones for the fossil fuel industry. This deal ties renewal energy to fossil fuels and we know that historically our communities have had pipelines like DAPL, Line 3 and KXL pushed through our lands despite our resistance. Pipeline man camps increase the human trafficking in our community and fuels our missing and murdered Indigenous peoples epidemic,” Jennifer Falcon with the Ikiya Collective, a group of climate and Indigenous peoples’ rights activsts based out of Texas, Oklahoma and New Mexico, told The Independent about the group’s action with Now or Never on Thursday.

“We talk about climate change as if it’s down the road but our communities are already without clean water. For us, climate chaos has been here for a long time. Our people are dying, we need democrats to hard. We need legislation and we need a climate emergency now. Our youth, your culture, our languages and the land depend on it,” Ms Falcon added.

The protests occurred after senators a day earlier announced a surprise deal to revive Build Back Better, the signature piece of Joe Biden’s first-term legislative agenda, which includes billions of dollars for incentivising e-vehicle purchases and includes other provisions for decarbonising both the US energy industry and Americans’ daily lives.

The deal, while a shock to many who thought the legislation dead and buried, is nevertheless far from passed into law and could still be hamstrung by Democratic resistance in the House or the Senate in the form of Mr Manchin’s fellow moderate, Kyrsten Sinema.

In a brief statement to The Independent earlier on Thursday, Now or Never indicated that they also wanted more action from the White House, particularly in the form of Joe Biden declaring a national emergency to fight climate change. The White House was hammered by reporters this week over reportedly considering that option but not making a decision one way or the other.

“We’re in a climate emergency. Democrats need to seal the deal on climate and get this package passed, and the President needs to declare a climate emergency,” said Vincent Vertuccio, a representative for the group. “This news is good news, but it is not a win yet.”

“We intend to keep the pressure up until it becomes one,” he added.