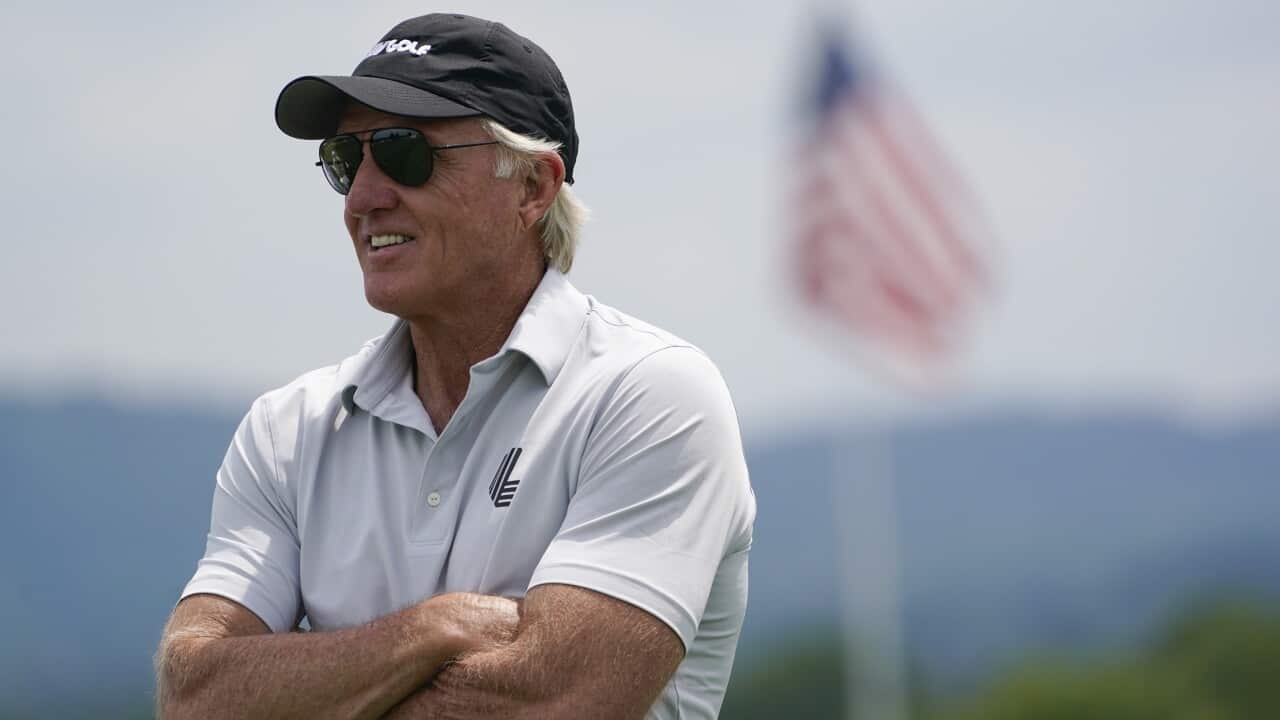 Australian golf officials are focusing solely on their own bumper summer schedule amid revelations Greg Norman’s Saudi-backed rebel tour is planning to stage at least one event here next year.
While is yet to publicly commit to the breakaway LIV Golf league, Australia was included in its preliminary 2023 tournament schedule released overnight.
The Saudi-backed series announced a 14-tournament plan for next year, with 12 established team franchises and a chance for players to either be promoted or relegated through its series of Asian Tour events.

There are plans for tournaments in Australia, North and Latin America, Asia, the Middle East and Europe, with LIV boss Norman saying the full schedule will be released later.

An Australasian tour spokesman on Thursday told AAP it had not been consulted about any LIV golf tournaments being held in the country.
The spokesman said, regardless, they were more intent on forging ahead with more than 10 tournaments this summer, including the long-awaited return of the Australian Open following the cancellation of the past two editions because of COVID-19.

LIV Golf organisers said their tour would not compete with the majors, international team events or heritage events next year.

What is LIV golf?

Norman, 66, was announced as the chief executive in October last year of the US$24 million ($35.5 million) LIV Golf tournament.
The LIV Golf competition describes itself as “golf, but louder”, and according to the tournament website, says it will “help transform it to the sport it’s destined to become.”
LIV golf runs separately to the PGA Tour, which runs the world’s biggest golf competitions.

But the PGA Tour will not release players to participate in LIV events, and several golfers have been suspended for defecting. Australian golfer Wayne Grady referred to the impact on the PGA Tour as an “absolute disgrace” in a social media post in May. 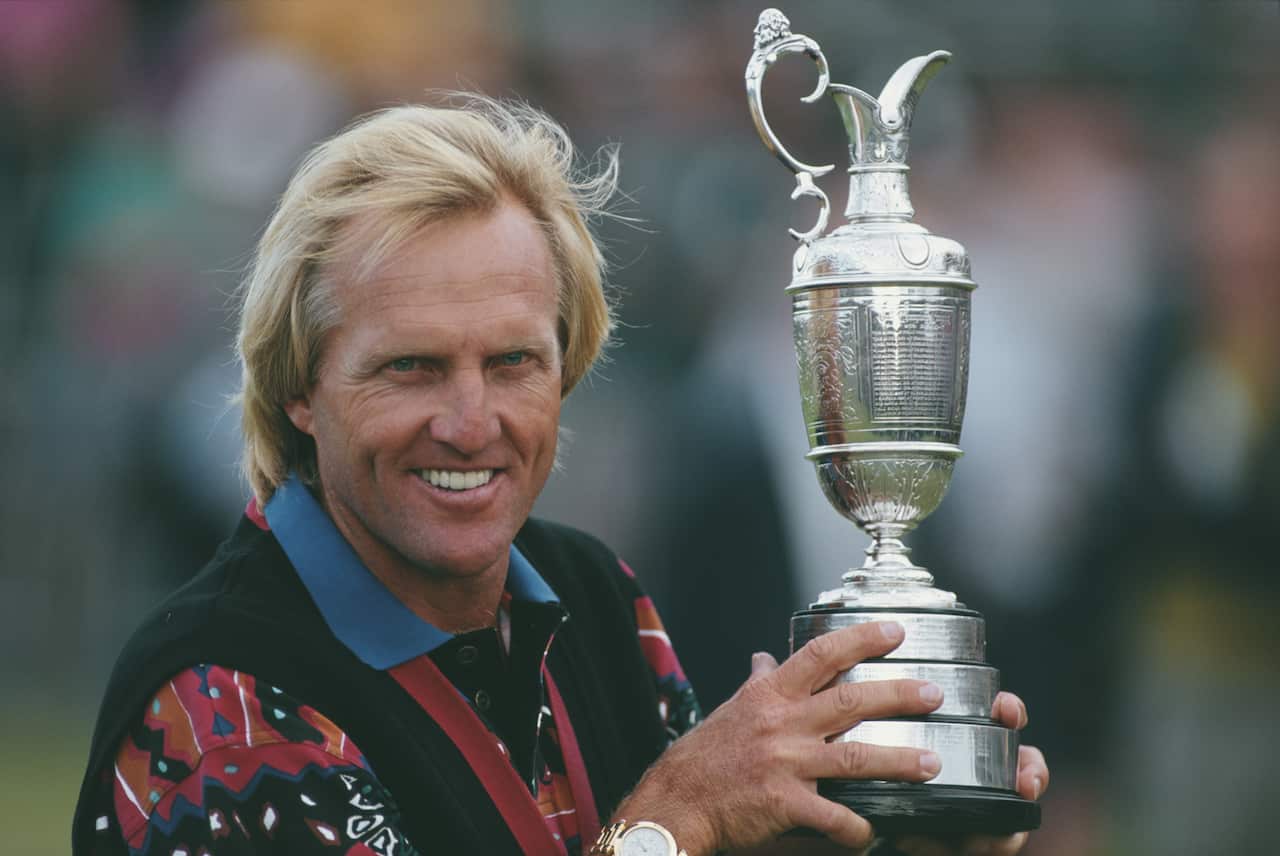 Along with fragmenting the players’ group, Norman has drawn the ire of critics over the venture being financially backed by Saudi Arabia’s wealthy sovereign fund, the Public Investment Fund (PIF), chaired by Crown Prince Mohammed bin Salman.

Critics have accused the former world number one of being complicit with Saudi Arabia in “sportswashing”.

Sportswashing is the practice of using sport “as a vehicle to try and overcome or change a country or institution’s reputation”, according to the director of the Brisbane 2032 Olympics engagement at Griffith University, Caroline Riot.
Many critics have argued that through PIF is “sportswashing” its reputation amid allegations of human rights abuses.
Saudi Arabia has been the subject of criticism after journalist was murdered inside the Saudi consulate in Turkey in 2018. During his career, he was outspoken against the government. Crown Prince Mohammed bin Salman has denied responsibility for the killing.
“The challenge that we see in this particular case is the very well-known and established and high-profile human rights violations of the Saudis,” Ms Riot
Ms Riot said sports leaders in the field have an obligation to be “ethically and morally informed” when choosing who funds their sporting innovations — or they run the risk of facing such criticisms.
“Where there are human rights violations in nations, they must be acknowledged. Public sports figures should not be benefiting from profits or taking money from countries that really need to clean up their act.”
Norman has denied claims of being complicit in sportswashing, telling the Washington Post that “every country has got its cross to bear”.
“Look, we’ve all made mistakes and you just want to learn by those mistakes and how you can correct them going forward,” he said in May when promoting LIV.

“Every country has done horrendous things in the past … just look at America with racism, for example, it’s just so embedded here, it’s just ugly,” he also told the Financial Times.

The LIV Golf circuit has lured some of the game’s biggest names away from the PGA Tour with the promise of guaranteed, big-money paydays and a reduced schedule.
Just last week, former US preident Donald Trump urged players to “take the money” and join LIV Golf, suggesting that those who remain loyal to the PGA Tour will ultimately pay a bigger price for staying put.
“All of those golfers that remain ‘loyal’ to the very disloyal PGA, in all of its different forms, will pay a big price when the inevitable MERGER with LIV comes, and you get nothing but a big ‘thank you’ from PGA officials who are making Millions of Dollars a year,” Trump wrote on the social medial platform Truth Social.

“If you don’t take the money now, you will get nothing after the merger takes place, and only say how smart the original signees were.” Mr Trump played at a LIV Golf pro-am event at his Bedminster, New Jersey, course on Thursday ahead of the third event of the LIV Golf Invitational Series taking place on the same course.

Cameron Smith snaps back at reporter over LIV golf question

Just as with the LIV Golf Invitational Series, which launched in June, LIV Golf League will feature simultaneous team and individual play.
The 48 contracted players will be part of 12 team franchises competing for $US585 million ($837 million) in prize purses.
Smith has been linked to a move to LIV in 2023 along with fellow Aussies Adam Scott and Marc Leishman.
Speaking to reporters after his British Open victory — the first Australian in 29 years to win golf’s oldest and great prize —
Smith snapped when the British reporter said, apologetically, that he was only asking because the rumour mill was in overdrive that the 28-year-old might be signing.
“I just won the British Open, and you’re asking about that. I think that’s not good,” Smith said, before being pressed further.

“I don’t know, mate. My team around me worries about all that stuff. I’m here to win golf tournaments.”

Between League events and International Series tournaments, LIV Golf will stage 25 tournaments worldwide in 2023.
Star players to commit so far include major champions Phil Mickelson, Dustin Johnson, Bryson DeChambeau, Brooks Koepka, Sergio Garcia and Louis Oosthuizen, while two-time Masters winner Bubba Watson is reportedly also set to join.
World number four Patrick Cantlay on Wednesday in the US coyly said that he has no plans “at the moment” to join the LIV Golf Series when this PGA Tour season concludes.
But he conceded the huge money on offer on the rebel tour was enticing.
“Yeah, I think anytime anyone’s playing their profession, money’s a big contributing motivator,” Cantlay said.
Meanwhile, American insurance company Mutual of Omaha has ended its sponsorship of Henrik Stenson after the Swede joined LIV.

Stenson, who won the 2016 British Open, was stripped of Team Europe’s Ryder Cup captaincy last week, hours before he announced his decision to join the breakaway league.