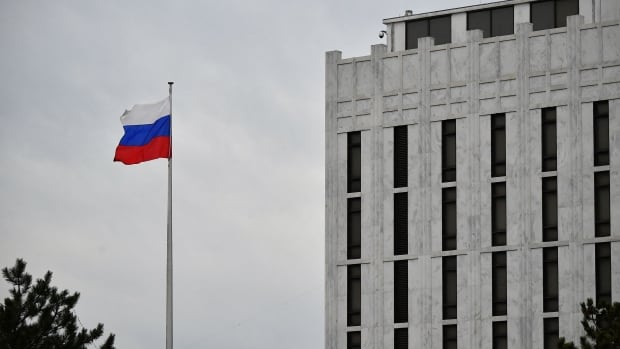 A push to use a prisoner swap to free two U.S. citizens from Russian detention may yield rewards for Washington, but experts say it provides no guarantees that future exchanges involving Moscow will be any more palatable.

Moscow made limited comment on the proposal until Friday, when Russian Foreign Minister Sergey Lavrov said he’s open to a discussion with Blinken.

If Washington’s approach prevails, the Biden administration could take credit for reuniting families and delivering results amid heightened tensions with Russia.

The Biden administration says it has made a ‘substantial offer’ to bring two American detainees home from Russia, including basketball star Brittney Griner.

Experts say there are always concerns such exchanges can provide motivation for authoritarian governments to use these mechanisms to their advantage now and in the future.

Weighing the pros and cons of the current proposal, Seva Gunitsky, an associate professor of political science at the University of Toronto, said he sees cause for concern if other people end up being unjustly detained because of the value they can provide in a future swap, based on what happens here.

And that’s left him “very ambivalent” about the proposal, in terms of the precedent it could set, he said.

Yet Eliot Borenstein, a professor of Russian and Slavic studies at New York University (NYU), said such arrangements may indeed reward some bad behaviour, but that’s a reality that has to be accepted when hard choices have to be made.

“At some point, the other side has to decide what’s important to them,” said Borenstein.

Prior to Lavrov’s comments on Friday, Moscow did not seem to welcome the U.S. decision to talk openly about the proposal — though Blinken’s remarks signalled to some the proposal was under consideration.

Michael McFaul, a former U.S. ambassador to Russia, told PBS NewsHour that Blinken’s comments were “a very positive sign” about the potential for the deal to move forward.

“It sounds like they have put together a deal,” said McFaul, who is calling for a third American — Marc Fogel — to be included in the exchange.

Stephen Sestanovich, the Kathryn and Shelby Cullom Davis Professor for International Diplomacy at Columbia University’s School of International and Public Affairs, said the U.S. was likely speaking to people at home and also to Russia, when sharing the information about the pitch to swap prisoners.

“Publicity is definitely unusual in a case like this,” Sestanovich told CBC News via email.

“Biden and his advisers may want to make clear to their own domestic audiences that they’re working the issue.”

He said it’s possible the U.S. expects it will also deliver a message to Moscow that Bout can be returned, but not to “drag this out indefinitely.”

Imbalance in the scales

Maria Popova, an associate professor of political science at McGill University, sees an imbalance in the scales of the proposal — with Bout, a convicted arms dealer, juxtaposed against Griner, a star athlete accused of a minor offence.

Whelan, the other U.S. citizen who factors into the proposed swap, was convicted in Russia on espionage charges two years ago —  but he and his family have asserted his innocence.

To Popova, it seems “the drive of the swap is Brittney Griner,” and said that has worrisome implications.

Should such cases become more common, “it may [become] an incentive to have other Western citizens detained on a variety of charges in order to be swapped,” she said.

NYU’s Borenstein said he believes deals like this involving Moscow tend to be asymmetric, because there is much more pressure in Western democracies for governments to take action as compared to within Russia.

“In a Western country, when it’s a matter of one of your people being held prisoner in a regime that you think is more authoritarian and restrictive, then there can be this grassroots movement, lots of discussion, lots of civic pressure,” he said.

“And there’s just not so much room for that in Russia right now.”

Danielle Gilbert, a Rosenwald Fellow in U.S. Foreign Policy and International Security at the John Dickey Centre for International Understanding at Dartmouth College,  said it’s not just Russia that could draw lessons from the exchange being proposed by the U.S.

“It teaches states like Russia, like China, Iran, Venezuela, that all they have to do is arrest a foreigner on these egregious, trumped-up charges and eventually, they’ll be able to negotiate their way out,” she told CBC News in a recent interview.

Another takeaway from all the news involving the proposal, experts note, is that Moscow and Washington are still talking, at some level, despite the many points of disagreement between them.

McGill’s Popova said she suspects those tensions are making any negotiations about exchanges of prisoners more difficult.

“There’s a lot of suspicion between the two sides,” she said.

But Borenstein believes it’s a good thing that some level communication is happening.

“Two huge global powers should be able to keep lines of communication open,” he said. “I guess it’s a sign that things could be worse.”