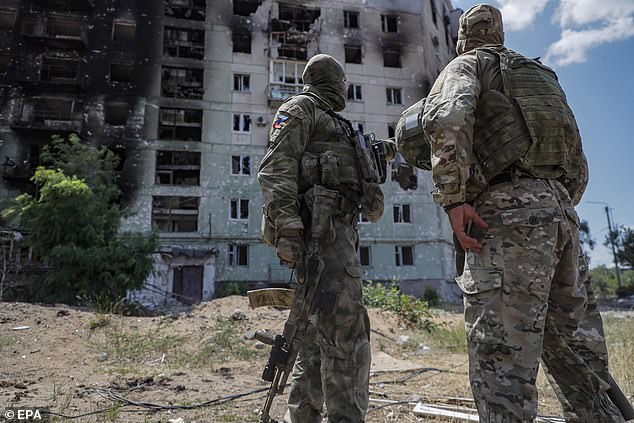 Horrifying video has emerged appearing to show a Ukrainian prisoner of war being castrated by his Russian captors.

The footage, which MailOnline is not publishing, shows a group of men wearing Russian camouflage pinning a soldier in Ukrainian fatigues down and using a box-cutting knife to remove his genitals and then hold them up to the camera.

It is unclear exactly when or where the footage was taken, but some of the Russian soldiers who appear in it were filmed on the frontlines in Donbas back in June.

Ukrainian MP Inna Sovsun tweeted the footage, saying: ‘Russia has to pay for it.

Russian soldiers have filmed themselves castrating a Ukrainian prisoner of war, in footage thought to have been filmed in Donbas (file image, Russian soldiers in occupied Donbas)

‘Give Ukraine the weapons we need to stop this nightmare once and for all. The world can’t pretend like this isn’t happening.’

It is also unclear what happened to the Ukrainian soldier in the video, but it is unlikely he survived his injuries without immediate medical attention.

Aric Toler, from investigative website Bellingcat which successfully identified the Salisbury poisoners, has told The Times that the video is likely genuine.

There is no evidence that the video has been manipulated, he said, pointing to Russian state media that showed some of the same Russian soldiers in the city of Severodonetsk back in June – shortly after it was captured from Ukraine.

Internet users are now attempting to identify the soldier seen doing the castrating, and believe he may have come from a Chechen unit that ultimately falls under the command of Putin crony Ramzan Kadyrov.

Others have suggested the camouflage he is wearing is from a Rosgvardia unit – Russian national guard that report directly to Putin. 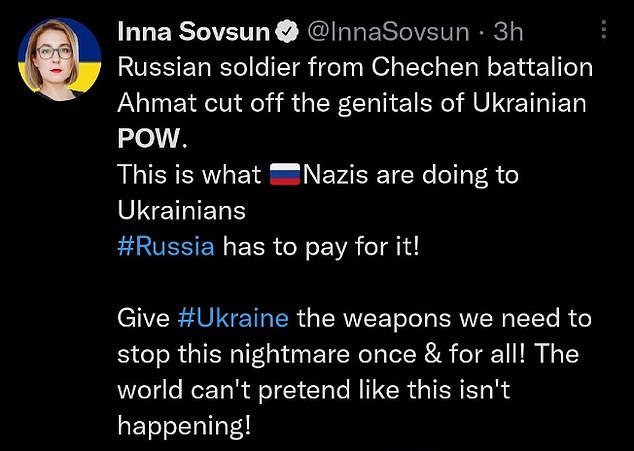 Inna Sovsun, a Ukrainian MP, was among official figures to post the footage – saying that ‘Russian must pay for it’

The video is just the latest in a long line of evidence of war crimes being committed by Russian forces in Ukraine.

Perhaps the best-documented were in areas of northern Ukraine that Russia occupied early in the war before being forced to retreat.

Bucha and Irpin, two cities on the outskirts on Kyiv, bore the brunt of the atrocities – with plentiful evidence left behind of kidnap, torture, and summary executions of civilians and soldiers.

Ukrainian officials have warned that similar atrocities are likely to have been carried out in other areas Russia occupies – such as Mariupol and Donbas – but Moscow has likely destroyed evidence of those crimes.

More than a million Ukrainians are also thought to have been forcibly deported from areas that Russia has seized and taken via filtration camps.

Soldiers, government officials, members of the emergency services, and their families have reported being sent to concentration camps on occupied territory where torture, sexual abuse, and mock executions are carried out. 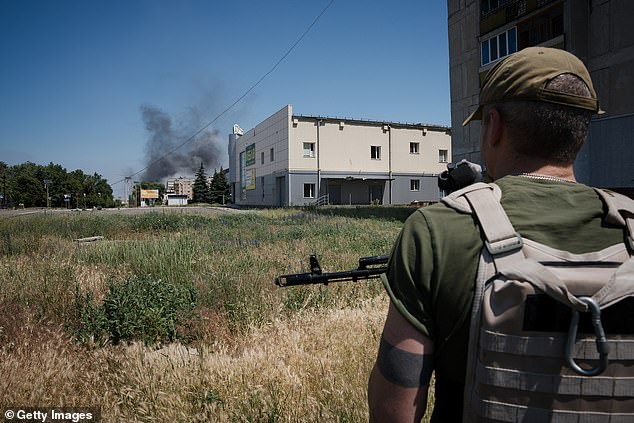 A Ukrainian soldier watches smoke from Russian bombs rise over the horizon in Severodonetsk, where the video is thought to have been filmed

Those who do not end up in the camps are sent deep into Russia – some as far as the island of Sakhalin, off the coast of Japan – where they are forced into work.

Ukraine says it is investigating more than 21,000 crimes by Russian forces, while international teams of prosecutors have gone to the country to assist.

The first to be jailed was tank commander Vadim Shishimarin, 21, who admitted shooting 62-year-old Oleksandr Shelipov dead in the opening days of the war.

Shishimarin said he was pressured to kill Shelipov by his comrades, fearing the elderly man – who was pushing his bike by the roadside – was about to report their location to Ukrainian troops.

The International Criminal Court has described Ukraine as ‘a crime scene’ and has dispatched its largest-ever team to investigate.

Massacres in cities such as Bucha and Irpin are under investigation, as are strikes on hospitals and other buildings where civilians were sheltering from bombs.

Russia is now five months into what was supposed to be a days-long war to depose the government and install a puppet regime.

Estimates of the civilian death-toll are near-impossible to come by, but Ukraine believes it runs into at least the tens of thousands.

United Nations human rights chiefs have documented at least 5,000 deaths, but say there are likely many more that cannot be verified due to fighting.