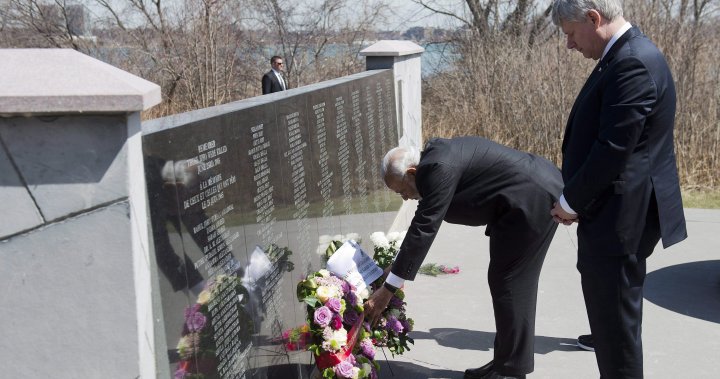 Thursday’s shooting death of Ripudaman Singh Malik, who was acquitted in 2005 of charges connected to the 1985 Air India bombing, is the latest chapter in the decades-long saga of the worst terrorist attack in Canadian history.

Of the 329 people killed in the bombing, a vast majority were Canadians. The attack launched an international investigation that led to just one person being convicted, along with accusations of “failures” on behalf of RCMP, intelligence services, airport security and the federal government.

Here’s a timeline of how the bombing unfolded, the resulting investigations and trials, and the fates of the men implicated in the plot, including Malik.

6:19 a.m. GMT: A suitcase bomb explodes at Narita International Airport in Tokyo as it is being transferred to Air India Flight 301, which was bound for Bangkok, Thailand. The blast kills two baggage handlers and injures four people.

7:14 a.m. GMT: A suitcase bomb explodes in the front cargo area of Air India Flight 182 as it is flying 31,000 feet above the Atlantic Ocean off the coast of Ireland. The plane had left Toronto and stopped in Montreal and was en route to London, with a final destination of Mumbai, India (then Bombay).

The remnants of the plane crashed into the ocean, and all 329 people on board — including 268 Canadians, mostly of Indian Hindu heritage — are killed. Only 131 bodies are ultimately recovered from the water by Irish salvage crews.

An investigation into both bombings is immediately launched, involving authorities in Canada, Ireland, Japan and India, with focus quickly narrowing on India’s Sikh separatist movement. Bomb parts recovered from both crime scenes were ultimately traced to Vancouver, from where the suitcase bombs were found to have been initially sent.

It was later revealed the bombings were meant to occur simultaneously while their respective planes were in the air, but the plotters failed to realize that Japan does not observe Daylight Saving Time.

4:01
Global BC at 60: Worst terrorist attack in Canadian history

RCMP raid the British Columbia homes of multiple Sikh men of Indian heritage suspected to be linked to both bombings, including Talwinder Singh Parmar, the leader of the extremist group Babbar Khalsa that had ties to India’s Sikh separatist movement. At the time of the bombings, Parmar is based in Burnaby, B.C.

The Canadian Security Intelligence Service, which had only been established a year before the bombings, had been monitoring Parmar for months through phone wiretaps and surveillance.

Police find bomb-making materials in the home of Inderjit Singh Reyat, an electrician from Duncan, B.C., who implicates Parmar. Both men are charged with possession of explosives and firearms, but Parmar’s charges are dismissed days later.

Reyat reaches a deal with prosecutors to plead guilty to the explosives and firearms charges, paying a $2,000 fine.

About three months later, Reyat leaves Canada with his family and settles in Coventry, U.K., near Birmingham. It is believed Parmar slipped out of Canada and relocated to Pakistan around the same time.

In the meantime, Mounties and Japanese investigators eventually link the bomb parts from the Narita airport explosion to Reyat, who is accused of purchasing the parts and sending the suitcase bomb from Vancouver to Tokyo.

Following a lengthy extradition process, Reyat is extradited to Canada in December 1989 to stand trial.

After an eight-month trial, Reyat is found guilty of two counts of manslaughter and four explosives charges relating to the Narita airport bombing. He is sentenced to 10 years in prison.

Parmar is killed during a shootout with Indian police in Phillaur, Punjab. It is believed he continued with India’s Sikh separatist movement after fleeing to Pakistan.

He is later believed to have been the mastermind of both bombings. A recording alleged to be Parmar confessing his role to police in Punjab is released in 2007, but has not been verified.

They lost family in the Air India bombing. Now they’re grieving for Iranian-Canadians

After 10 years with no arrest or public signs of progress in the Air India Flight 182 investigation, RCMP offer a $1-million reward for anyone with information.

Investigators insist they are close to solving the case, telling reporters the investigation is in an “acute phase.” But no significant updates are given for another five years.

Malik and Bagri are both linked to the Babbar Khalsa extremist movement that had been led by Parmar.

0:49
Jagmeet Singh says he will continue to denounce acts of violence – including Air India bombing

Jagmeet Singh says he will continue to denounce acts of violence – including Air India bombing – Oct 15, 2017

Just days before completing his 10-year sentence for the Narita airport bombing, Reyat is charged with murder, attempted murder and conspiracy for the Air India bombing.

As in the Narita airport case, Reyat is believed to have sent the suitcase bomb from Vancouver to Toronto without flying there himself.

Reyat pleads guilty to just one count of manslaughter in connection with the Air India bombing, and is sentenced to five years in prison.

The plea was believed to be part of a larger deal with prosecutors to cooperate in the case against Malik and Bagri.

The trial for Malik and Bagri is held in a specially designed, high-security courtroom at the Vancouver Law Courts for over one and a half years.

During the trial, Crown contends the bombing plot was hatched by Sikh separatists in Canada, including Malik and Bagri, in retaliation for the 1984 raid by Indian authorities on the Golden Temple, a Sikh holy site.

More than 100 people are called as witnesses, including Reyat, who ultimately claims to not recall key details of the Air India bombing and says nothing to implicate the accused.

The trial finally concludes in December 2004.

B.C. Supreme Court Justice Ian Josephson finds Malik and Bagri not guilty on any of the charges against them.

In his verdict, the judge says the evidence from RCMP and Crown had fallen “markedly short” of the threshold for conviction, and found the main witnesses not credible.

He also revealed that a trove of potential evidence, particularly over a hundred recordings from CSIS wiretaps on the suspects and other witnesses, had been destroyed, making the remaining tapes inadmissible and hurting Crown’s case.

Reyat is accused of lying over two dozen times during his testimony at Malik and Bagri’s trial.

While awaiting trial on those charges, he is denied parole in 2007 and forced to serve his full five-year sentence for the manslaughter charge.

He is granted bail in July 2008, clearing the way for his release from prison.

Prime Minister Stephen Harper calls for a public inquiry into the Air India bombing, overruling the previous Liberal government’s decision to hold an administrative inquiry that would have had no subpoena power.

The 4,000-page, five-volume report from the Air India bombing inquiry, subtitled “A Canadian Tragedy,” finds a “cascading series of errors” by the government, RCMP and CSIS allowed the bombing to take place.

The report makes several recommendations to improve Canada’s intelligence agencies and airport security and prevent “turf wars” between agencies like the RCMP and CSIS.

It also calls for the government to make a formal apology for the “catastrophic failures” that led to the bombing, which Harper delivers a week later on the 25th anniversary of the tragedy.

After multiple delays in the trial due to issues with jury selection, Reyat is tried on the perjury charge and found guilty.

He is sentenced to nine years in prison in January 2011.

Justice Ian Josephson denies Malik’s request for the government to cover his $9.2 million in legal fees from his trial.

Malik had argued the length and complexity of the trial, the number of lawyers he had to hire and weak evidence from a key Crown witness warranted a judicial review of his case, which Josephson dismisses.

Reyat is given a statutory release after serving two-thirds of his sentence for the perjury conviction. He is released to a halfway house and placed under strict release conditions.

On Feb. 14, 2017, Reyat is released from his halfway house, allowing him to live anywhere he chooses with his family. He is still not allowed to participate in political activities or contact any families of the Air India bombing victims.

2:28
Only person convicted in connection with Air India bombing released

Malik’s family confirms he has been killed in what police call a targeted shooting in the Newton neighbourhood of Surrey, B.C.

During his time in Canada, Malik founded the Khalsa Credit Union in 1986. At the time of the shooting, he was serving on the board of trustees for Khalsa Schools, a collection of Sikh faith-based private schools across the country.