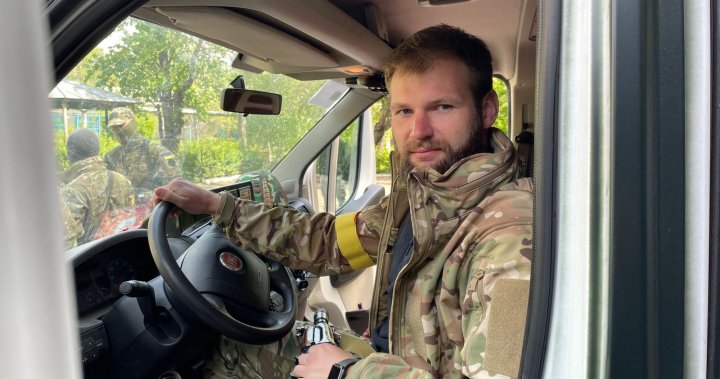 Before the Ukrainian war, Oleg Belotskyy was a well-known professional motocross rider. These days, his driving and coordination skills are tested behind the wheel of an ambulance, transporting injured soldiers from the front lines to hospital.

Russians are shelling ambulances as they push toward the front lines, explosions just metres in front of them.

His explanation of how he feels in those moments aren’t pretty — but they’re honest: “I’m not feeling like Superman. Every time I am scared,” he says. “Every time I have s–tty pants.”

Belotskyy, 31, is from Kyiv. He says he fell into his new wartime profession after transporting his family to safety near the western Ukrainian city of Lviv and running supplies between the two cities for a Ukrainian volunteer paramedic group known as the Hospitallers.

When they found out he could drive and speaks English they asked him to come on board.

The group, which is dependent on donations, delivers supplies to the front lines and operates a volunteer ambulance service. One of its bases operates in a town near the city of Dnipro.

2:46
‘I’m not feeling like Superman’: Inside a hospital on the doorsteps of Russia’s war in Ukraine

‘I’m not feeling like Superman’: Inside a hospital on the doorsteps of Russia’s war in Ukraine

The closest city to the front lines of the war in Ukraine’s southeast, Dnipro has become a hub for war efforts — humanitarian and military. The bustling city of about one million residents is Ukraine’s fourth-largest, and has remained a relatively safe island as war rages along a 480-kilometre front line just several hundred kilometres away.

But those front lines can seem much closer than they are. Belotskyy says they can see red flames from rocket attacks from the Hospitallers base.

‘Every time I think it will be my last rotation’

The group operates in a leafy suburb at an old hospital, a long line of black ambulances parked outside. Russians target them with artillery shells, so Berlotskyy says they tried to camouflage them with twigs and netting.

But that didn’t work, he explains, showing us a picture on his phone of the smouldering carcass of a pick-up truck that was previously used to transport goods and injured from the front lines. So instead they painted the ambulances black.

The Hospitallers battalion is made up of both Ukrainians and international volunteers, who have found middle ground in their belief that their skills would be better served here than anywhere else.

When we visit, Belotskyy’s crew — made up of him, an American and two Swedes — are loading up an ambulance for a month-long rotation near Kharkiv. They’re dressed in military uniforms, rifles slung over their shoulders.

“We are joking in the queue when we have a rest in a Georgian cafe, eating Georgian food, listening to European music, with Swedish guys, American guys, Ukrainian guys with Russian shotguns going into the front to war with Russia,” Belotskyy says, of their international make-up.

He believes this is his fifth or sixth rotation, which can last anything from a few days to a few weeks.

Once a symbol of wartime despair, Kyiv’s train station is a place of hope

Each time, he says, he swears it will be his last. His family thinks he’s “insane” and the danger he’s encountering on a daily basis isn’t lost on him, either.

“Every time I think it will be my last rotation. I’m like ‘no, enough,’” he says.

“Then I remember the simple soldiers sitting at the front. These simple people have one last packet of cigarettes and they want to share it with you. They are wet and dirty on mud, on blood. And every time I’m thinking about it, that’s why I come back.”

Belotskyy has no military experience, other than frequenting shooting ranges as a hobby.

But most of his friends are in the army or volunteering and he is keen to also do his part. Ukrainian men aged between 18 and 60 are also prevented from leaving the country under a presidential decree, in case they are called upon to fight.

While the skills are not directly transferrable, especially because ambulances have a much higher centre of gravity, he says, his motorcycling background has helped in other ways.

“Motorcycle races help me to understand how quickly and safely to make some kind of corners and some surfaces. It’s really helping to understand the physics laws and how to do the same with ambulances and motorcycles,” he says.

The volunteer crew works in unison with the military, waiting for a call from soldiers to say they need to retrieve the wounded. Sometimes, the fighting is too intense for ambulances to make it through, he says, even the Ukrainian military’s ambulances.

When they do arrive, having dodged shelling to make it, there are often many patients awaiting them. They take away the most severely wounded — sometimes three or four at a time.

Often, on the very front lines, the road is often too chewed up for ambulances to navigate. At those moments, the team has to use pick-up trucks and load injured soldiers onto the back.

“Many people are asking how you put injured people in a pick-up truck when they are bumping up and down. Yes, exactly. They bump, but they die if they’re not in there,” Belotskyy says.

Most of the injuries Belotskyy is seeing are shrapnel wounds and concussions. Many soldiers have two or three concussions and still don’t want to leave the front, Belotskyy says.

Fellow volunteers believe it’s a testament to the strength of the Ukrainian army.

Patrick, one of the two volunteers from Sweden in Oleg’s crew, joined the Hospitallers after five years in the Swedish military and serves as a paramedic.

Despite his time in the army, this is his first time in a war zone. He says he left the army for Ukraine because he believed his skills would be better served here. He is spending his own personal money to be here, though the Hospitallers provide most of their food and accommodation.

Patrick says many of the injuries he is seeing are caused by a “mix of heavy artillery shelling and soldiers not wearing their plates and helmets.”

He’s encountered countless instances of sheer will and determination from the Ukrainian fighters.

When they were working in Irpin, before the Russians withdrew at the end of March, the group helped a soldier with a severely infected hand wound, caused by a dog bite. The soldier had been adamant he was fine, but Patrick says he would’ve needed an amputation if they were a day later in treating him.

“Another time, we were with one of the commanders, he was driving a tank. He had a severe concussion. And he’d just black out once in a while. And he just refused to leave,” Patrick says.

While he initially thought the war would only last a couple of months and he would return home after, he vows to stay indefinitely. His family isn’t thrilled about the decision, but he feels compelled nonetheless.

In ruined Ukrainian village, stranded elderly residents are all who remain

“I don’t know how to explain, but the Ukrainians really care about their country and people and they will give their lives for it. They will not give in to the Russians. And I have nothing but admiration for that,” he says.

“We’ve been here two months now and I don’t regret a thing. I feel more at home, like I’m doing something with a purpose.”