Hundreds of nurses lined the streets outside a courthouse in Nashville Friday to protest against the sentencing of a colleague who was found guilty of homicide after injecting a 75-year-old patient with the wrong drug.

RaDonda Vaught, 37, faces up to eight years behind bars after giving patient Charlene Murphey a drug that triggers paralysis instead of a sedative at Vanderbilt University Health Center in 2017.

Protesters in the central-Tennessee city donned purple T-shirts reading ‘#IAmRaDonda’, and brandished placards saying, ‘this would not be happening if her initials were M.D.’. They heard rallying speeches from nurses, supporters and even members of Murphey’s family who claimed she wouldn’t want the nurse to be imprisoned.

Vaught was found guilty of the lesser charge of criminally neglect homicide and gross neglect of an impaired adult in March.

Her defense has requested a judicial diversion, which would see the charges diverted and eventually dropped following probation. They point out she has no prior offenses.

But the prosecution argues the gross neglect charge cannot be diverted, saying the judge should take Vaught’s attitude into consideration. She was charged with perjury in 2021 for checking a box on a firearms application saying she had no pending felony charges, and that same year she gave an expletive-laden TV interview.

The case has galvanized nurses across America, who are already struggling against crippling staffing shortages and poor working conditions following the COVID-19 pandemic. Many have already quit the profession saying the risk of going to prison for a mistake has made nursing intolerable. 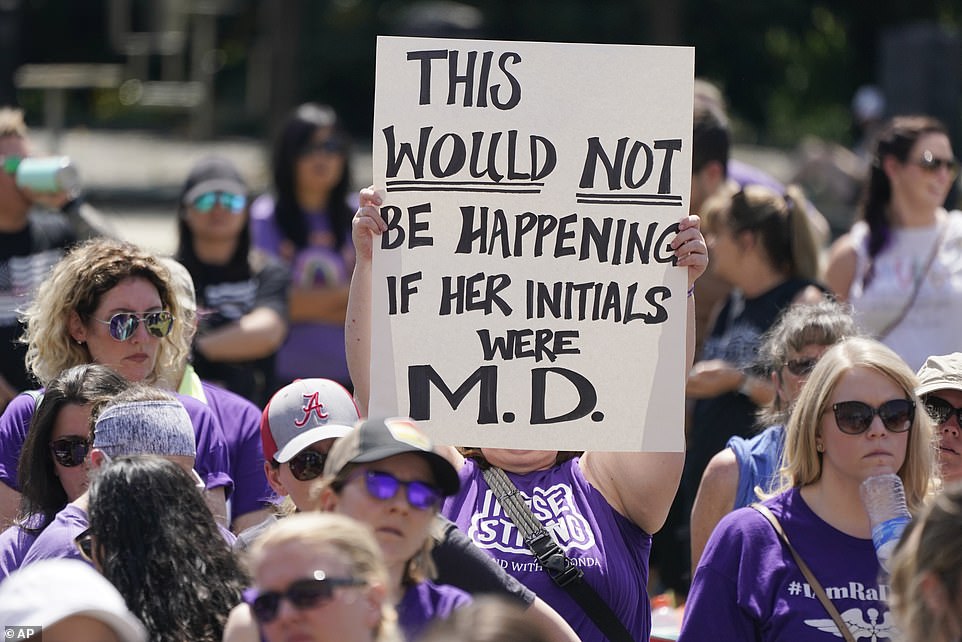 Hundreds of nurses protested outside the courthouse in Nashville, Tennessee, today as colleage RaDonda Vaught, 37, faces up to eight years in prison for accidentally injecting a 75-year-old patient with the wrong drug 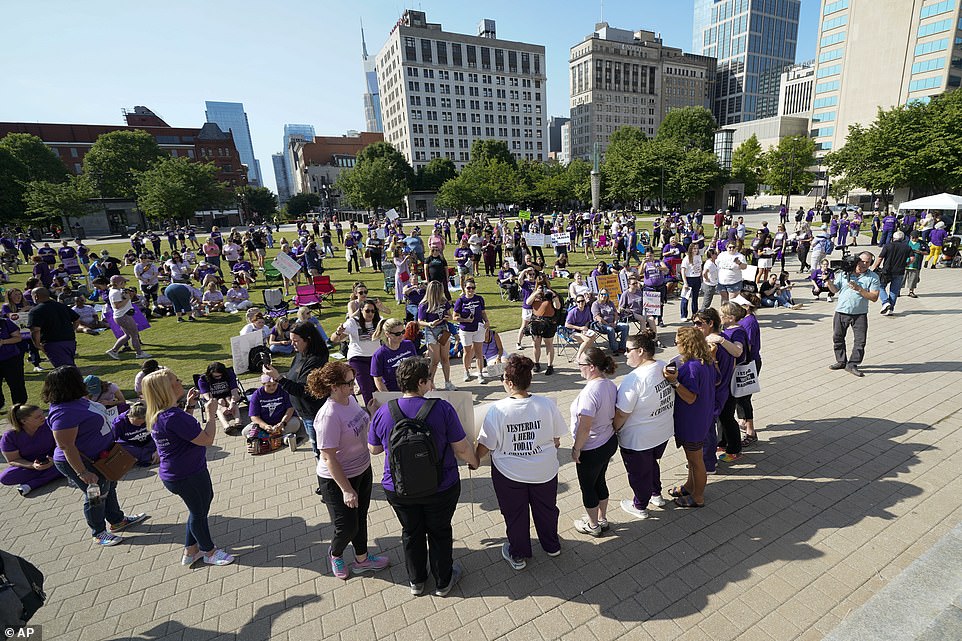 They held up placards proclaiming that they were heroes in 2020 but felons in 2022, turning up to protest against being imprisoned for a mistake made at work. (Photos in Nashville, Tennessee) 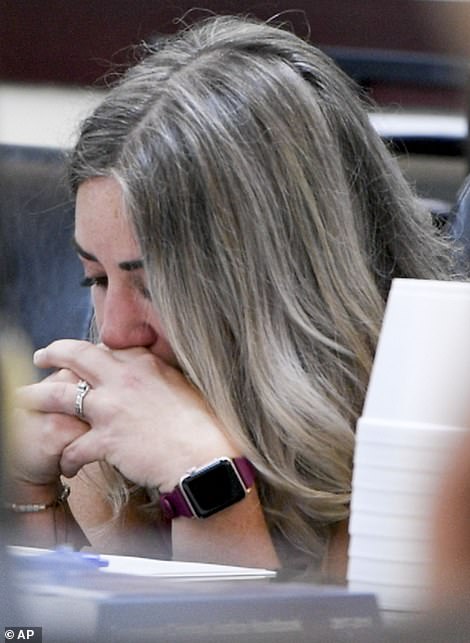 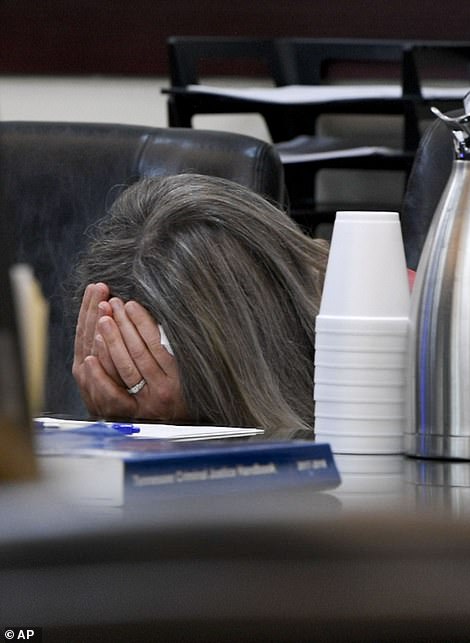 Pictured above is RaDonda Vaught in the court, where she is waiting to find out if she will be sentenced to up to eight years behind bars. She was found guilty of criminally negligent homicide and gross neglect of an impaired adult in March 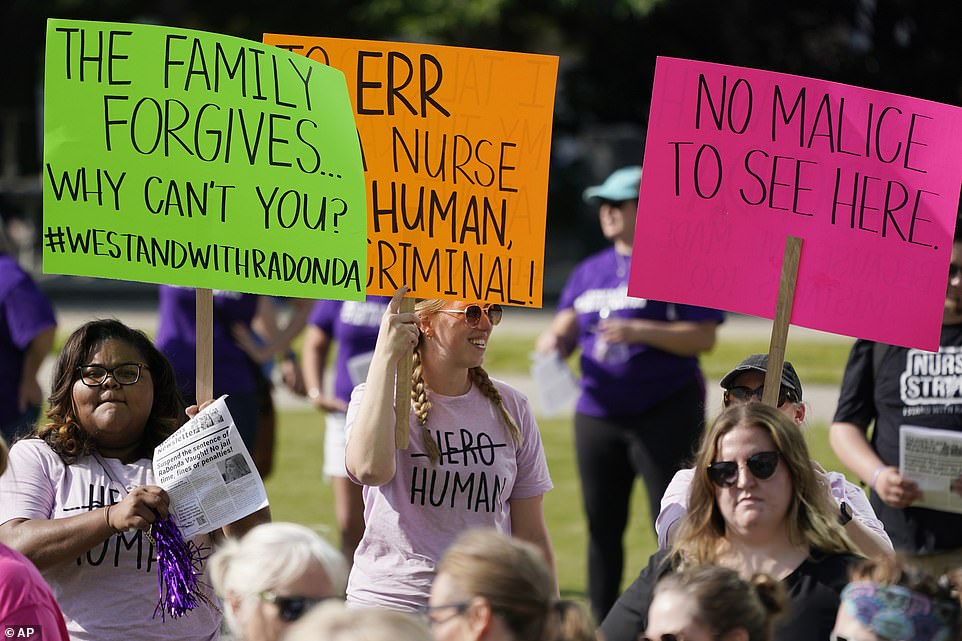 Nurses heard speeches from colleagues, supporters and even a member of the victim’s family saying their mother would not want the nurse to be imprisoned. They are awaiting a sentence later today 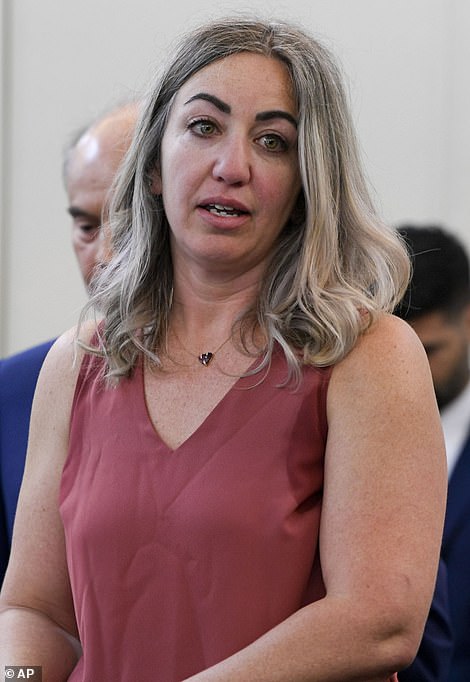 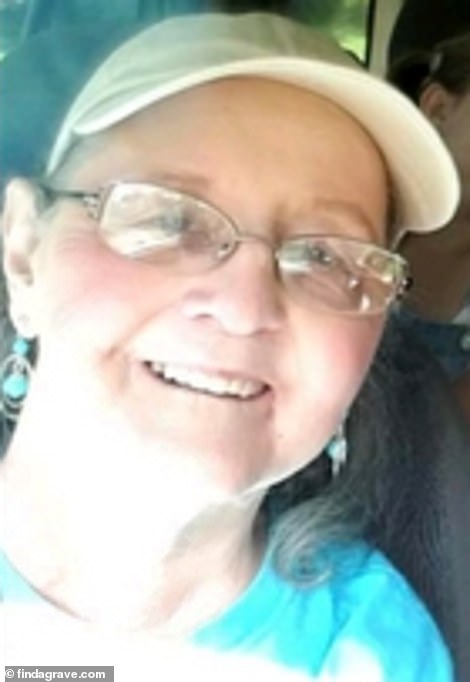 RaDonda Vaught, 37, (left) injected patient Charlene Murphy (right) with a paralysis drug instead of a sedative in December 2017 at Vanderbilt University Medical Center. She is facing jail time for the action, and the patient later died

The victim’s son Michael said,: ‘Knowing my mom, the way my mom was and stuff, she would not want to see her [the nurse] serve jail time,’ reports ABC News

His view contrasts with the victim’s husband, who wants the nurse to serve a prison sentence.

She freely admitted to making several errors with the medication that day, but her defense attorney argued the nurse was not acting outside of the norm and systemic problems at Vanderbilt University Medical Center were at least partly to blame for the error.

Interviewed after the verdict, Vaught said she was relieved to have a resolution after 4 1/2 years and hopes Murphey’s family is relieved as well.

‘Ms. Murphey’s family is at the forefront of my thoughts every day,’ she said. ‘You don’t do something that impacts a family like this, that impacts a life, and not carry that burden with you.’

Murphey had been admitted to the neurological intensive care unit on December 24, 2017, after suffering from a brain bleed.

Two days later, doctors trying to determine the cause of the bleed, ordered a PET scan to check for cancer. Murphey was claustrophobic and was prescribed Versed for her anxiety, according to testimony. 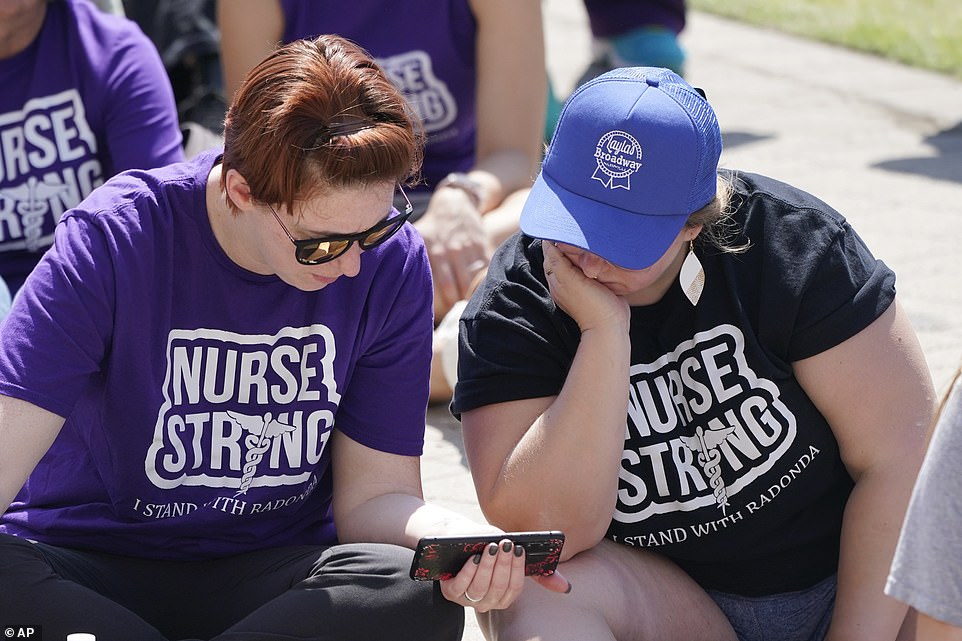 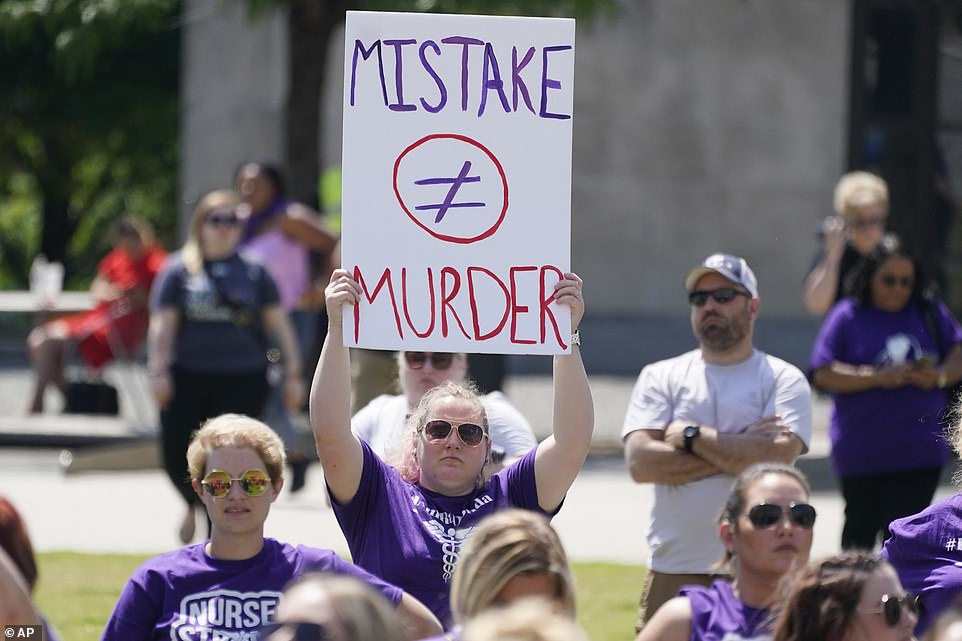 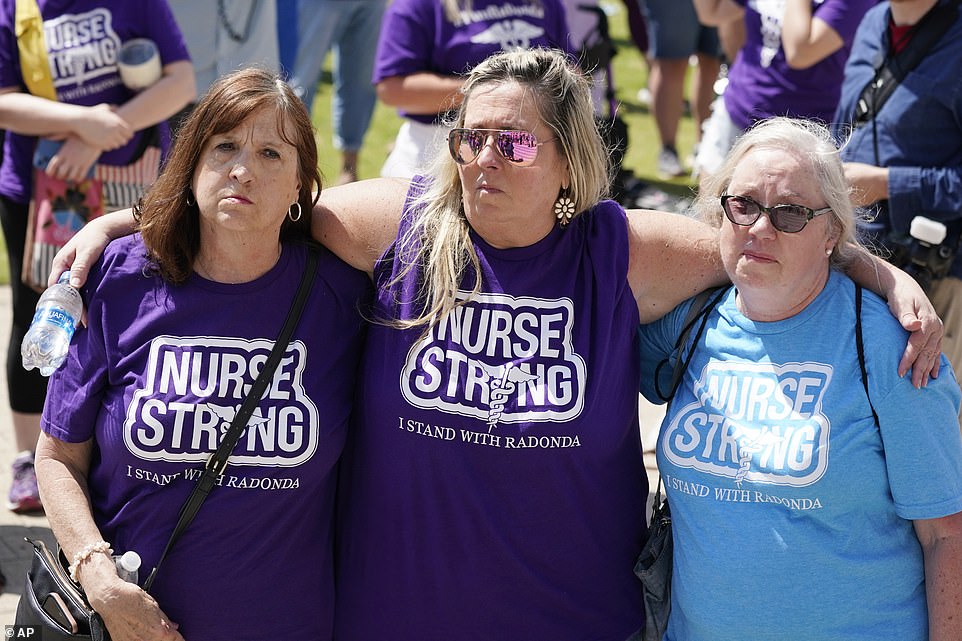 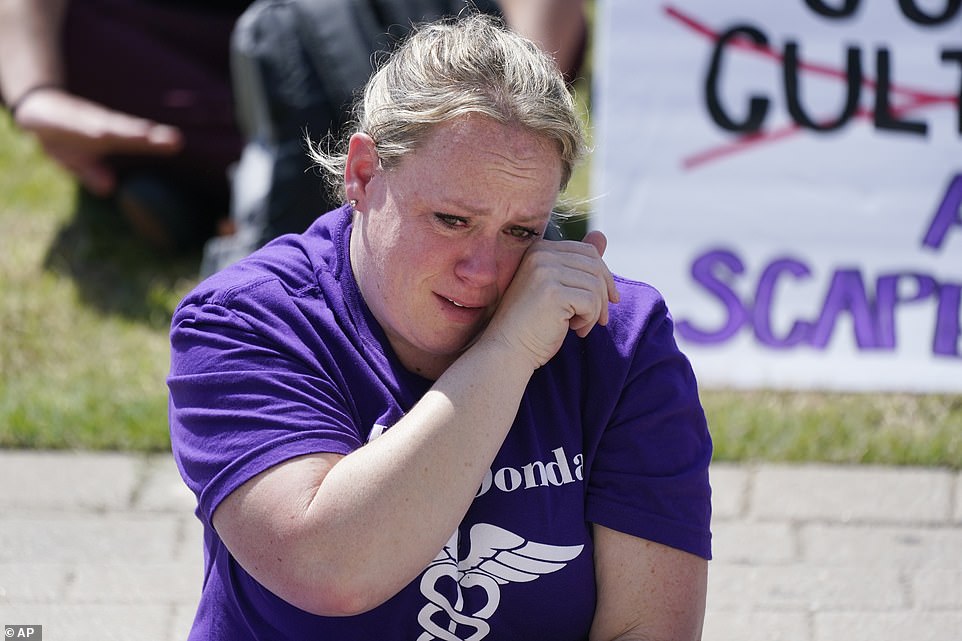 When Vaught could not find Versed in an automatic drug dispensing cabinet, she used an override and accidentally grabbed vecuronium instead.

An expert witness for the state argued that Vaught violated the standard of care expected of nurses. In addition to grabbing the wrong medicine, she failed to read the name of the drug, did not notice a red warning on the top of the medication, and did not stay with the patient to check for an adverse reaction, said nurse legal consultant Donna Jones.

Leanna Craft, a nurse educator at the neuro-ICU unit where Vaught worked, testified that it was common for nurses at that time to override the system in order to get drugs.

The hospital had recently updated an electronic records system, which led to delays in retrieving medications from the automatic drug dispensing cabinets. There was also no scanner in the imaging area for Vaught to scan the medication against the patient’s ID bracelet.