A shocking video shows the moment a hoon brazenly burns rubber right next to a police vehicle on a city street.

The driver of a golden Ford Falcon performed a series of doughnuts and figure-eight burnouts in a main street of Bendigo, in regional Victoria, at around 1am on Saturday morning.

Plumes of tyre smoke were seen as the driver performed the stunt around a stopped patrol car with its lights on and siren blaring.

The Falcon did several laps past the police car performing figure-eights and doughnuts while a Mexican flag trailed from its window in front of a crowd of whooping onlookers.

The sedan roared as it punched through the thick cloud of smoke, speeding off past a police car further up the road, sparks flying out from its undercarriage.

Only when the Falcon was clearly making a getaway did the police vehicle start to drive after it.

Victorian police confirmed to Daily Mail Australia no arrests were made at the time but the matter is currently under investigation. 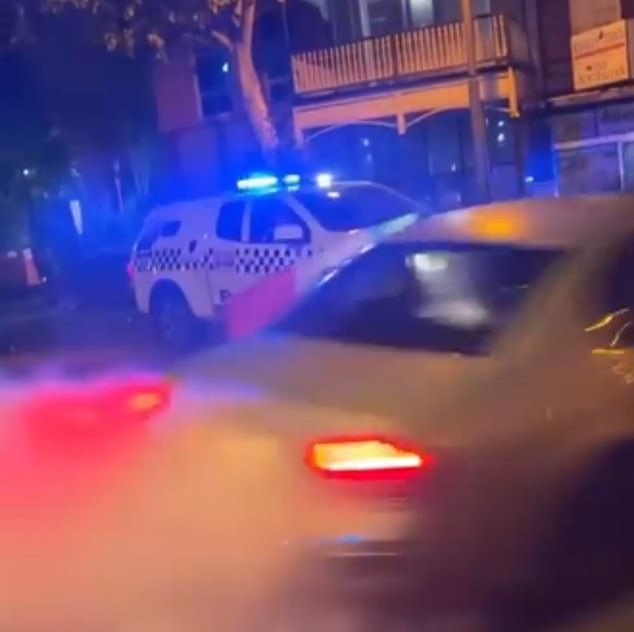 The flag is a signal of affiliation with the Mexican Hoon Cartel, a driving group who have nearly 50,000 subscribers to their Youtube channel.

The channel showcases many videos of drivers across Australia performing illegal stunts. 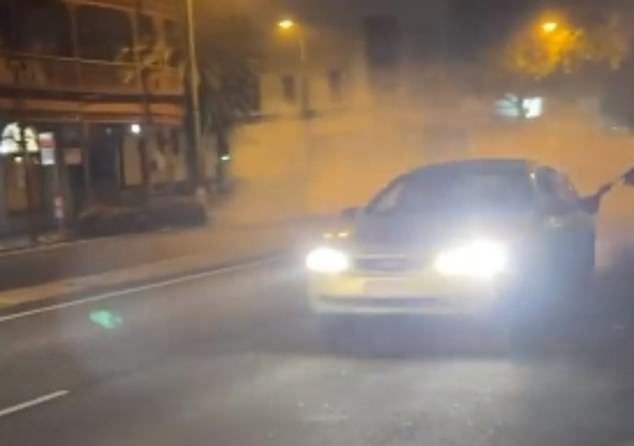 The gold Falcon (pictured) tore past the sitting police car multiple times before speeding away into the night. No arrests were made at the time but the matter is currently under investigation

Police slammed the Mexican Hoon Cartel for putting themselves and others at risk by performing the dangerous stunts at break-neck speeds.

But the group has responded to the backlash by demanding Queensland‘s state government provide more local burnout and drifting tracks for car lovers. 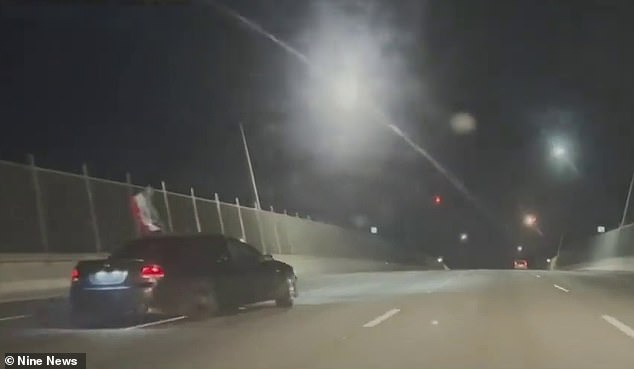 In the footage recorded on the major bridge, a car sways across four lanes of traffic while proudly hanging a Mexican flag out the passenger window.

Flames are seen shooting out of the exhaust of another car in front as loud rap music plays in the background of the hair-raising clip.

Other videos show drivers in balaclavas burning rubber on suburban streets and industrial estates, leaving behind a tell-tale trail of black tyre marks.

The group is infamous for turning suburban roads into racetracks and regularly asks their social media followers to tell them where they should hoon next.

Senior Sergeant Donna Stewart from Queensland Police said she had ‘no doubt’ somebody would die after just one wrong move. 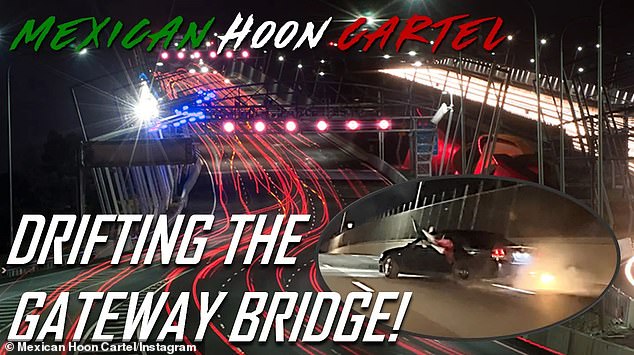 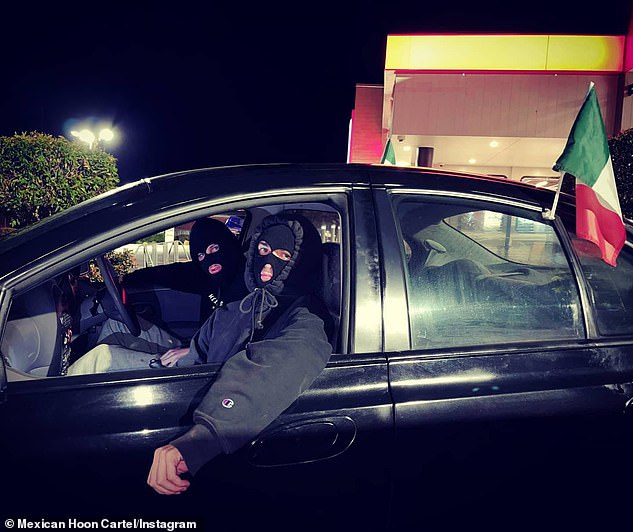 Other videos show drivers in balaclavas burning rubber on suburban streets and industrial estates, leaving behind a tell-tale trail of black tyre marks

‘I don’t know what it is they’re compensating for, but clearly they have some needs that aren’t getting met some other way and they’re choosing to do this,’ she said.

1. More affordable and accessible venues such as drift tracks and burnout pads to be set up by state governments in hoon hotspot areas.

The group claims this will ‘reduce and potentially eliminate illegal driving behaviour on the streets’.

2. Police to focus on more serious crimes instead of hooning and the traffic offences that relate with such behaviour.

The large album of videos uploaded to the group’s social media accounts will now be used as evidence as detectives work to track the drivers down.

The Mexican Hoon Cartel has a website where fellow hoon-enthusiasts can purchase air fresheners, balaclavas, face masks and stickers with their logo.

The group has started a petition asking for more affordable and accessible burnout tracks, which has received more than 12,000 signatures.

In a statement, the group said their passions for hooning are ‘constantly suppressed by the government and the media on a daily basis’.

‘They will lie and go to all ends to manipulate the people of Australia and create a false image of how bad and evil it is to be a so called ‘hoon’,’ it said.

‘We are still human beings and deserve a voice and to be considered by the government before they make their current irrational decisions on the topic of hooning.’

The group argued that if skateboarders were allowed skateparks, ‘rev-heads’ should be given an arena to safely play-out their passion.

Hoons have become a growing problem on the Gold Coast, with groups of enthusiasts in 2021 sparking a police crackdown. 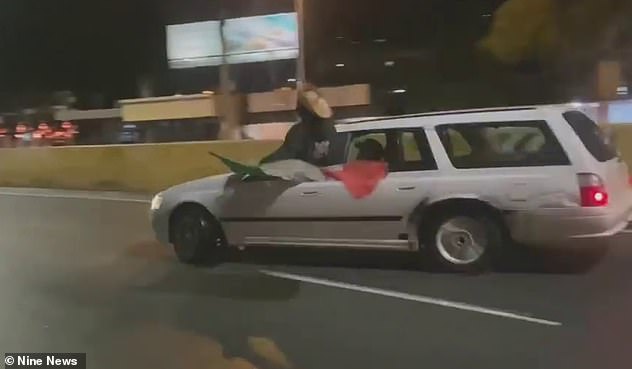 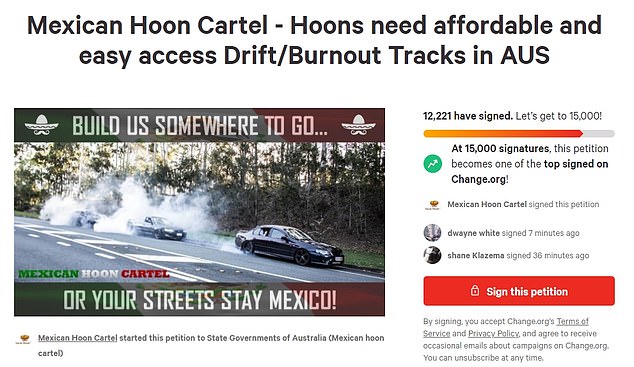 The group has started a petition asking for more affordable and accessible burnout tracks, which has received more than 12,000 signatures (pictured)

The reckless driving can also lead to more serious offences such as evading police or speeding up to 45km/hour above the speed limit.

In January, a hoon unrelated to the group performed donuts outside a busy Queensland Police Station, with footage quickly going viral online.

The TikTok video shows the brazen hoon in a sedan doing a burnout past a parked police SUV on Hinze St at Southport on the Gold Coast.

A police officer can be seen emerging from the building after hearing the screech of the tyres before he disappears in thick smoke.